Occasionally a blogger has to beg.  It’s undignified, but it has to be done.  This is one of those times.  Please (please, please) vote for WHISKYdotcoza as your favourite online store .  We’re late in the game on this one 😦  – voting closes today.

I know that most (all?) of you will be inclined to help out of sheer goodwill, but here’s the bonus.  By voting you’ll also stand the chance of winning an iPad.

Recently, after a not inconsiderable amount of effort, I finally acquired that bottle of Redbreast 12yo for which I’d been pining for so long. 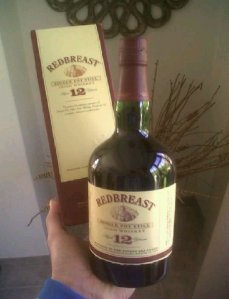 As they say in my home town - kiff bru!

My immediate instinct, as someone who writes about whisky, was to conduct a “tasting”, because that’s just what’s expected.  A tasting is one of those serious sessions where one follows a very particular process to tease out one’s impressions of a whisky.  Serious enough in fact that one finds it necessary to resort to the third person.   Too serious.

After thinking about it for a while I favoured the lose-yourself-to-the-moment drink when you don’t have to concentrate on anything other than your own pleasure.

Don’t get me wrong.  I like tastings.  I’ve attended some awesome tasting functions, notably those put on by my friends at the College of Whisky.  I’d suggest however that on the education-enjoyment continuum these things are inclined towards the former. Tastings are a bit like school, or work.  They may be useful.    They’re frequently necessary.  They may even be interesting.  But when it comes down to it you’d rather be at the beach.

Firstly, you don’t just uncork on a whim and start chugging.  You have to build the context if you want to do this right.  Our senses are most acute – and hence most receptive (but certainly not most appreciative) – in the morning and when we’re hungry.  In what seems like a past life I worked for a brandy manufacturer, one where the management team was expected to take part in tasting panels…first thing in the morning.  Once a week, the bare minimum, I’d reluctantly haul my arse over to the bottling plant and douse my palate with young, blended brandy – mmm!  Luckily they hadn’t cottoned onto the hunger aspect, or if they had they graciously let us off the hook.

Personally I reckon we should keep mornings for champagne, preferably accompanied by croissants and eggs benedict.

Say NO to hunger

The spartan theme of the thing doesn’t end there – the formula dictates that the tasting area should be well ventilated and free of distracting odours: food, cleaning solutions, dubious personal hygiene, and, ironically, also scented soaps and toiletries.  A smoker would have likely impregnated his or her clothing with cigarette smoke – don’t invite these dodgy buggers to your tasting.

Secondly, you need to be properly equipped.  A tasting should be done using a nosing glass – a tulip-shaped vessel, usually on a stem.  These glasses have a narrowly tapered rim to concentrate the aroma or nose of the whisky.  Sometimes, for blind tastings, or particular sessions where the taster doesn’t want to be influenced by the whisky’s appearance, they might be opaque.  There’s no doubt that they’re fit for purpose, but, in my opinion, they’re also a bit poncy.

If I wanted to be doing little pinky salutes with every sip I’d be drinking tea from a china cup.   Admittedly Glencairn’s version – with its satisfyingly masculine foot – has dialled down the pratt-factor somewhat.

Nevertheless, give me a solid crystal whisky tumbler any time.  Well-balanced and comfortable in the palm of your hand, this is the ticket to a legendary whisky drinking experience.  These days you get them with an appropriately tapered rim so the nuances of the nose don’t just pass you by. 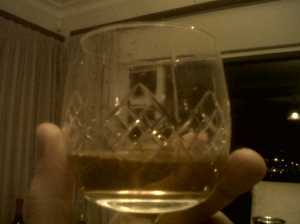 Glenfarclas 30yo in a Schott crystal tumbler

Thirdly, there’s appearance…which, as they say, can be deceiving.  It’s no different for whisky.  Here you’ll be looking at colour, texture and clarity.

When it comes to colour the basic rule of thumb is that whiskies aged primarily in sherry casks should be darker and more coppery, and those aged primarily in bourbon barrels should be lighter and more golden.  However after you’ve thrown in the possibility of refill variations, finishing in exotic woods, virgin casks, and caramel colouring (the wolf in sheep’s clothing effect), it just becomes a waste of time for anyone other than the keenest expert to extract any kind of meaningful insight.

In evaluating texture (and later the nose) the tasting presents a Shakespearean dilemma: to swirl or not to swirl that is the question.  A conventional tasting guide will encourage you to swirl the whisky about in your glass so that you can ogle the “legs” of the whisky (sometimes also called “tears”, less fun).  These are the little rivulets that form as the swirled whisky runs down the sides of the glass.  These can be long or short, and fast or slow-moving – from which you can draw inferences about alcohol content, and texture.  There’s another camp that suggests that whisky should not be swirled.  SA wine and spirits guru Dave Hughes, a man worth calling for his answering machine message alone, was quoted as follows on the subject:  “don’t vigorously swirl the whisky in the glass as you would wine.  Leave it idle since the aromatics are important – and delicate – and you don’t want those escaping as you agitate the glass violently”.  I’m going to answer the Hamlet question with another question.  This gimmick is quite nifty, especially at a promotional tasting.  It has an impressive feel about it.  Novices sense they’re learning something – they’re virtually on their way to becoming master distillers.  But take a step back.  Does it really add value?   The alcohol strength can be gleaned far more precisely from the label.  And texture is only important once the whisky’s being drunk, at which time you should feel free to swill it about with gay abandon and get a good gauge of the mouth feel.

The last element to consider in assessing appearance is clarity.  This is actually more meaningful, and it’s worthwhile doing.  Here you’ll be trying to deduce whether this whisky is chill-filtered or not.  You may remember from this post that chill filtration essentially removes flavour from the whisky, so for the true whisky lover it’s an abomination.  Lift the glass to the light and scrutinize the whisky for any cloudiness.  If it’s crystal clear it means that the whisky has likely been chill-filtered; if you can pick up a bit of haze then it’s likely to be what’s called a “non-chill filtered” whisky, or possibly a whisky that’s been less aggressively chill filtered.  You’ll be able to do this more reliably by chucking in a bit of ice or some cold water since this will precipitate the congeners that form the haze.  I wouldn’t encourage this though – unless it’s a warm day.  Cold inhibits the flavour of the whisky on your nose and palate.

In the next post we get down to brass tacks – the flavour.  Until then, may the dram be with you.

I’ve made a sort of loose commitment to myself that I’m not going to drink tequila anymore.  Actually shoot is more apt because I don’t plan on depriving myself of the occasional margarita – that would be needless overkill.  My rationale?  Why chuck back cactus juice when I could be sipping fine whisky.  It’s taken me a while to unearth this pearl – age it seems has its merits – and to appreciate its simple beauty…but now that I have long may its lustre last.  Tequila buzz, pah…it’s a myth.

I recently had the opportunity to put my resolve to the test – during the bachelor party of an Irish friend.  The chaps in attendance had been known to pursue Mexican gold with the enthusiasm of modern-day conquistadors.  Once, crazed by tequila feva, two of them pinned me down whilst I was asleep, and a third squirted tomato sauce into my mouth till it seeped out of my nose.  True story.  Anyhow, on this occasion I steeled myself, ignored the taunts, and meandered towards a bottle of Black Bush.  It proved to be validation indeed – of the highest order.

Black Bush along with its little brother, Bushmills Original, is an unusual specimen amongst blended Irish whiskeys in that its component parts come from different distilleries.  This is common practice in Scotland, but in Ireland, with its mere handful of distilleries, blend composition tends to stay in-house.  Given that Bushmills has no column stills and thus cannot make its own grain whiskey it sources this instead from Irish Distillers’ Midleton distillery.  Black Bush is a malt/grain blend, so it contains no single pot still – that special nectar which I suggested in my last post as being central to the Irish whiskey identity (and of which I now have a bottle, hooray!).   Nevertheless the Bushmills brothers can truly claim to be the most representative of Irish whiskeys – the malt comes from County Anheim in the North, where the Bushmills distillery is located, and the grain comes from County Cork in the South, home to Midleton.   I can well imagine that this would have been the dram served during the Good Friday peace talks.

This is some light-hearted conjecture on my part of course.  But I thought I’d throw it into the mix.  I’m reasonably confident that I’m toeing the party line.  Whisky makers in my opinion are deliberately cagey about the makeup of their products; this both encourages positive conjecture amongst consumers and it keeps their options open.   Marketers will tell you that mystique adds to the allure.  This is all somewhat self-serving.  I’m pretty sure it’s not in the consumer’s best interests to be left in the dark.  When you’re shelling out hundreds of rands and more for a bottle of whisky you deserve to know – as precisely as is reasonable, and as is the case with most other product categories – what it is that you’re getting.

In this game it seems that Bushmills is no exception.   The label claims that it is “matured to perfection in sherry casks” and indeed the sherry influence is its defining feature.  However, I’ve struggled to definitively confirm whether it is exclusively or just predominantly matured in sherry casks.  Frustratingly there are other grey areas; notably its age, and the proportions of grain and malt.  Withholding the latter is hardly unusual, and indeed this may need to vary to maintain flavour consistency from bottling to bottling.  In fact I really don’t mean to single out Black Bush.  I’m for the moment bottling in a full-blown tirade – but springing a few leaks in the process.

Anyhow, as much as I was distracted by picking over these details, I didn’t let it deter me from fully and unreservedly appreciating this exceptional product.  From the first glance at its rich maple syrup colour this whiskey exalts the sherry womb from which it (mostly?) sprang.  The nose is big and fruity with a spicy undertone – I could picture a mince pie made with delicate phyllo pastry.

Inside every bottle of Black Bush

The liquid has a full, but slick mouthfeel, with the intense fruit persisting on the palate, and the spice, identifiably cinnamon, more prominent than before.  The oak is restrained, imbuing the whiskey with a well-rounded, smooth, balanced character without ever taking centre stage.    Fine stuff from start to the finish – which incidentally reminded me of something that I couldn’t quite place at the time: a high quality Turkish Delight.  It was only after sampling some Bushmills 10yo, in which this flavour resonates, that the penny finally dropped. 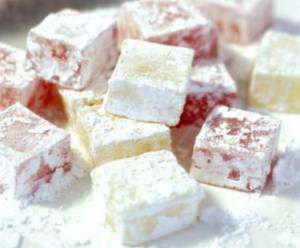 Pronounced in the 10yo

Black Bush has undoubtedly deepened my love of Irish whiskey.  To coin those famous lyrics “the pipes the pipes are calling”.  I’ll be sure to answer as regularly as I responsibly can.