Are pairings here to stay?

The relatively nascent trend of pairing food with whisky (and now brandy) is all the rage at the moment.  I for one am delighted – a burgeoning friendship between one’s great friends, what could be better?  Moreover chocolate, sincerely one of my very dearest friends, seems to be a popular pairing partner – hooray!  But are pairings just a passing fad or do they have the legs to become a classic consumption ritual? 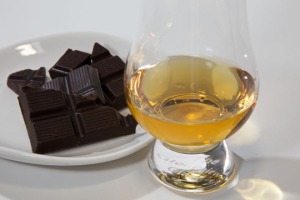 The basic idea with a pairing is synergy.  The flavours of the whisky or brandy (or whatever – other spirits will surely follow if they’re not doing so already) and the food should complement and enhance each other, thus creating a whole that’s more than the sum of the parts.  Interesting, but hardly so revolutionary that I spilled my drink as I jumped up in excitement. Wine has obviously been doing the same thing for millennia.

My forecast for the former is pessimistic.  Wine, as a meal-accompanying beverage, also plays a lubricating role, which spirits, with their higher alcoholic strength, can’t really hope to fulfil, at least not without a level of dilution that compromises flavour.  I suppose that one could supplement with water, but that’s unwieldy.  People gravitate towards the simple and the natural, and personally I can’t see this becoming habitual – although at the very least it offers an alternative in good company: my uncle’s tut-tutting when I’ve drunk beer instead of wine comes to mind…water off a duck’s back.   Nonetheless, these musings certainly don’t suggest that one couldn’t and shouldn’t enjoy an occasional meal pairing experience.  I recently attended two lunch functions – Checkers LiquorShop at the Bascule and KWV-Brandy Foundation at the Pot Luck Club (more on these shortly) – where the hosts used this platform, quite superbly, to exhibit their offerings.

More promising to me though, as a sustainable, long-term “ritual”, is the latter style of pairing, where the food accompanies the whisky or brandy, not the other way around.  This is effectively a jumped-up, better-thought-out version of snacks-with-drinks. It just works – no further thought required.   I’m still a pairing novice but I can recommend the following:

–          oysters (roll out the island whiskies, Islays and Talisker in particular, and hold off on the Tabasco)

–          cake (sherry cask whiskies such as Macallan, Glendronach and Aberlour)

I would continue but I’m drooling all over my keyboard.  May the dram be with you!