A diamond in the rough

Posted on 4 May 2016 by Patrick Leclezio | Leave a comment

In 2005 whilst living in Italy I discovered rum.  I’d been stumbling over it for a while of course, drinking mixed rums – typically in the fabled Cuba Libre style – but I’d never picked it up, dusted it off, held it to the light and given it proper consideration.  My prior experience of it had pigeonholed the spirit as something agreeable but limited, like a friend with whom you have just the one thing in common, which once exhausted leaves nothing much else that’s engaging.  My awakening, in the little bars of Trastevere in Rome, where the forerunning Latin appreciation for the drink had already been given unrestrained expression, exposed me to a sleeping giant.  In products like Appleton’s 21YO, Pampero Anniversario, Barbancourt, and Zacapa Centenario (these were the days before Diageo’s misguided attempt to fashion the thing into a cocktail base), I felt I’d seen a glimpse of the future.  Ten odd years later this future has finally arrived in the country.   Stay with me as I draw open the curtains.

Rum is a spirit with a colourful history, but with associations I feel that have held back its graduation to the upper echelons attained by its peers.  The reference to pirates, sailors, navvies and the like has evoked images of adventure, fun and daring-do, dominant themes in how rums have portrayed themselves and been perceived, but the potential for elegance and style has been largely overlooked, ignored, and overshadowed in the process.  No longer. The era of “sipping rums”, rums that have been judiciously produced and significantly matured, that can be drunk neat or with a dash of water, and that would not be amiss if served in a gentleman’s club, has been dawning, albeit slowly.  It’s been a bit of a drawn out, extended, impatient wait but today there is a satisfying-enough number of these rums available on the South African market.  This is great news, dare I say cause for raucous celebration (ok, refined celebration) for those of us who love fine spirits, in that it both confers a previously unknown abundance and variety of flavour to our drinking repertoires, and in that it does so for remarkable value; that the price of rum compares favourably with that of whisky and cognac is a gross understatement.

There are challenges certainly: rum, to be blunt, is all over the show.  The industry is fragmented; there are no unifying standards (often even within individual territories); there is no concerted and coordinated effort at consumer education, worrying at a time when consumers are thirsty (yes, sorry) for information and more discriminating than ever before; access to and depth of information, for those aficionados who are looking to self-educate is sketchy; and, for many of the reasons listed, the perceived integrity of rum in relative terms is sorely lacking – why, as an example, does Zacapa get to label a rum with the age of its oldest component when Appleton denotes theirs with the age of the youngest?  Surely this can’t be good for the wider category?  The flip side is that rum producers have incredible freedom.  Column stills, pot stills, both, liberal maturation – almost anything goes, all without constraints.  With a sparsity of rules and regulations comes both the risk of consumer confusion and frustration, and scope for incredible creations.

I had the opportunity recently to evaluate side by side all the major players contesting our attention locally.  The standard bearers for rum have long been the historically intertwined Bacardi and Havana Club, although the latter has only more recently manifest itself as a global brand.  The former’s 8YO and the latter’s 7YO are both plump, juicy drinks, ironically quite similar, with a pleasing fruitiness, perhaps pineapple, on the palate, and a long finish.  They may not be intricately complex, which I’m pretty sure is not the intention anyhow, but they’re solid, dependable and, most importantly, enjoyable.  From stalwarts to upstarts.  My guiding principle in analysing global spirits is that a premium brown spirit cannot be successful without heritage.  One of the most striking and impressive exceptions is the barrier-breaking Patron Spirits Company.  They’ve again broken the mould with Pyrat – its liquid has such a pronounced orange flavour that some rum commentators suspected added flavouring.  In fact the rum is finished in casks that had previously held orange liqueur, the only such instance of which I’m aware.  It may not be everyone’s ration of grog but its two strokes of silky citrus and bitter tang are simple and effective, at least for my taste.  Pair it with a few squares of dark chocolate as a digestif.  Also out of ordinary is Inverroche’s 7YO rum.  Next time I’m drifting down the coast I’ll stop in specifically to explore how this is put together.  All rums are made with cane (forgetting a few beet derived freaks) – either molasses or juice, so you’re pretty much be expecting a sugary profile.  The Inverroche rum is less sweet and more herbaceous – it is as distinct a rum as is available in the country.  Appleton, the venerable, long established Jamaican distillery, conversely, produces liquid that as typical as rum can be imagined to be.   Both its X/V and its 12YO display pungent molasses on the nose and ripe cane on the palate, as if you’d sunk your teeth into a stalk on the cusp of fermentation.   A rum’s rums, so to speak.

My favourites though, each of which glittered with the best of rum’s new sparkle, were those from Mount Gay, with which I could imagine myself to have endless entertaining conversations – the Black Barrel, syrupy and rich, maybe a factor of its heavily charred casks, with a peppery surprise on the finish, and the XO, subtle and sophisticated with notes of caramelised sugar and a juicy, mouth-coating fullness – and then, inevitably, the much beloved, and somewhat maligned Zacapa.  The suggestion has been made that Zacapa has declined in quality of late, since the reins changed hands, but if this is true then I wasn’t able to detect it.  It remains the complex, layered, gripping rum, brimming with sweet oak and sultanas, that I first tasted all those years ago.  The virgin press juice, the solera process, the variety of four different casks including Pedro Ximenex sherry, and the high altitude maturation constitute a winning formula.  It is outstanding, and it continues to be the herald of rum’s progressing journey to the pantheon.  Salud! 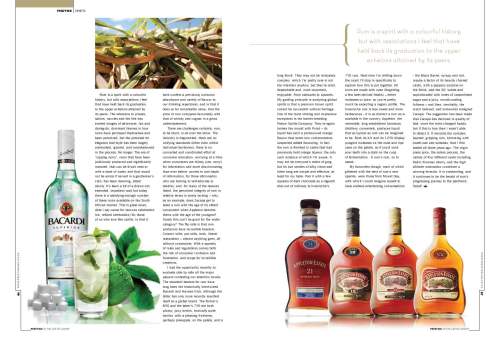