Posted on 26 February 2018 by Patrick Leclezio | Leave a comment

An insider’s guide to the best-loved foods of Mauritius

You’ll eat and drink well in Mauritius whether or not you read this article.  It’s one of those places where it’s impossible not to.  The melding of a rich history, diverse cultures, obliging natural resources, and slick hospitality have contrived to make great food a virtual inevitability.  This island is endowed with a special culinary proficiency, one amongst the many charms which have been vital in making it such an appealing destination.  The stuff that you’ll find on the surface however – the half-board buffets, the occasional stop at a street stall, and the internet-guided restaurant selections – will only take you so palate-pleasingly far.  There’s the good, and then there’s the exceptional – the gems that need to be unearthed, like a truffle by a cultivated hog.  Whilst I hesitate to liken myself to a pig – others may not be as reluctant – I have a certain voracity for and knowledge of the island’s foodstuffs, which may be useful to you, the discerningly hungry visitor.  In the interests of full disclosure though, given that you’re about to invest some time, I should mention that I recently convinced a group of visitors to Mauritius, whilst we were taking drinks on a terrace overlooking the ruins in Balaclava, that the mask of the same name had its origins in the ritual headgear of monks who inhabited these structures in the early eighteenth century.  Don’t let this deter you.  I’m more serious when it comes to food.

Mauritius has a population that is majority of Indian descent, so it’s no surprise that their influence is pervasive in its cuisine.  My particular favourites are the flatbreads, and of course the curries.   Whilst these exponents have been carried far and wide by the Indian diaspora, there are variations that are if-not-unique-to then well-honed on the island.  The paratahs (or rotis / faratas, as you would have it), a great Indian staple, are here in force, but it’s to the dhal puri that you should dedicate particular attention.  Made from dough containing split pulses, which cooks to a flaky consistency, and typically served with chilli, pickles or sometimes curry, it is only commonly available in Mauritius (although a distinct style has manifest itself in the Caribbean).  The dhal puri is the ultimate snack (or indeed meal!):  displaced Mauritians, like myself, are known to habitually order towering stacks during our visits, which we’ll then freeze and take back with us, such is its delectability.   They are widely available at street stalls but the most reputed, sought-after dhal puris are probably those from Dewa, located in the big Bagatelle mall in Moka.  Another interesting flatbread worth trying is the ti poori.  This is effectively the Indian deep-fried puri, but served in Mauritius with a mix-and-match selection of local dishes, such as rougaille (a tomato-based stew of many varieties), bredes songes (Mauritian water cress), achard de legumes (pickled vegetables) and bringelles au miel (honeyed eggplant), as well as the obligatory curries.  It’s best procured from a specialist caterer like Modley (+230 5796 5084), for a long, lingering, gregarious lunch on a verandah overlooking the ocean.

Moving from flatbreads to their ostensible fillings, two indelibly Mauritian curries that’ll reward the seeking out and then some are the curry de cerfs (venison), and the curry d’homard (lobster).   The former is tied into the earliest recorded history of the island, when the original Dutch settlers introduced Java deer – populations of which have persisted over the centuries, considerably outlasting their masters.  It’s not easy to find on a menu, the supply of deer meat being irregular, but stay on the lookout, and if you’re in a villa get your housekeeper on the job – spicy and gamey make a heady mix of flavours.   The latter’s finest purveyor is the unassuming but outstanding Chez Rosy in Souillac in the south.  There are members of my family who are unable to mention this place and its lobster curry without visibly salivating.

If you’ve ever eaten and enjoyed madumbis (or even if you haven’t), then Mauritius has a special treat in store for you.  One of the local taro yams, the arouille violette, is closely related (but markedly superior), and makes the most delicious mash that you could hope to taste, knocking the socks off the potato version.  They’re available from most vegetable markets on the island, and are best appreciated in combination with a meat dish.

Another exotic item of Mauritian produce is the highly nutritious tamarind fruit, the dark sticky pulp of which is used to produce juice, pickles, preserves, and chutneys.   Most people describe its flavour as sweet, tangy and tart, but I find it musky as well – it’s quite unique.  Les Vergers de Labourdonnais offers an outstanding, brilliantly refreshing tamarind juice (distributed to most of the major supermarkets), which might be the most convenient and accessible means to sample this unusual fruit.

The arouille and the tamarind fruit, of all the victuals of my childhood, live largest in my memory, along perhaps with the punch mariage, an iced concoction of rum, lemon juice, sugar, water and egg white, traditionally served at Mauritian weddings.  I’ve remembered it well not because it was regular fare for me, despite the relaxed European-leaning Mauritian attitude to liquor for children, but for one striking occasion in particular:  my younger brother at the tender age of four, unobserved during a function, got stuck into a bowl of this punch, with unfortunate, albeit hilarious results…if I might be allowed to find a sauced infant hilarious.  He clearly found it delicious.  It is delicious.  Punch mariage can be sourced by order only from Nathalie Maurel (+230 5257 2172), considered to be the island’s foremost expert.  I’d recommend that you request it to be made with New Grove’s Plantation Rum, one of the best of the white Mauritian  rums.

As one would expect from the “pearl of the Indian ocean” fish and fruits de mer are integral to the culinary life of the island.  Whether it’s bistro fare at a place like Hidden Reef in Pointe aux Cannoniers, or fine dining at Jacqueline Dalais’ (the Mauritian Heston Blumenthal) La Clef des Champs in Floréal or the more touristy but nonetheless enchanting Château Mon Désir in Turtle Bay, the best dishes are likely to be seafood based.  A trip to Mauritius is an opportunity – which you should seize with both hands – to partake of this natural bounty.   There are two fish in particular that are spoken of in hallowed tones by those with deep roots on the island: Sacré Chien and Gueule Pavée.  They’re less abundant today although they do appear in restaurants here and there.  You may be most likely to strike it lucky with a trip to the Débarcadère de Grand Baie, the jetty for the town’s fishing boats, an interesting excursion regardless, and if you don’t you can also opt for delightful alternatives such as Vielle Rouge and Capitaine.   Mauritian waters, and consequently tables, are replete not only in fish, but also in octopi, crabs, oysters, mussels, lobsters, prawns, scallops and the like, but the most iconic of the island’s dishes hinges on a combination of its aquatic and terranean resources.  Make it your particular mission to track down and savour palmiste with crevettes or camarons, the  succulent heart of a palm tree, served with prawns, typically in a red sauce, and prepared in a variety of ways;  Curepipe landmark La Potinière has a souffléd version which is especially noteworthy.

I’ve left the sweets, one might say the best, for last – last but not least, because for nation built on sugar, the expectations excited by its confectionaries, patisseries and desserts, which won’t be disappointed, quite the opposite, should rightly be at the front of the queue, and fervent.  There are so many stops on this glorious journey – some prime examples ranging from sucre d’orges, a twirly hand-made rock candy fashioned by the religious sisters on the island, and papaye tapée, rich, juicy slabs of candied fruit contributed by the Chinese-Mauritian community, to puits d’amours, an egg custard tart perfected by the Patisserie Marimootoo in Curepipe, and the genoise au coco, a coconut cake so good that you’d be tempted to sell your soul for a slice– that the end will always be another trip away.  The pinnacle though, the cherry on the top of this massive Mauritian mountain of mastication, must surely be the napolitain.  Whilst its origins are unknown, lost to the mists of time, one thing is certain: the napolitain is indubitably, exclusively, and comprehensively Mauritian – it is not found anywhere else, unless transplanted by Mauritians.   Made with two shortbread style biscuits sandwiching guava jelly (classically, although other jams are also used), and then covered with pink icing, this melt-in-your-mouth delicacy exhibits flavours so extraordinarily  complementary that one might say they are fated to be fêted.  The crème de la crème are those made by Patricia de Speville (+230 5788 3331) according to an old family recipe at her bakery in Tamarin and sold under the name Pat’s Cookies in various outlets all over the island. 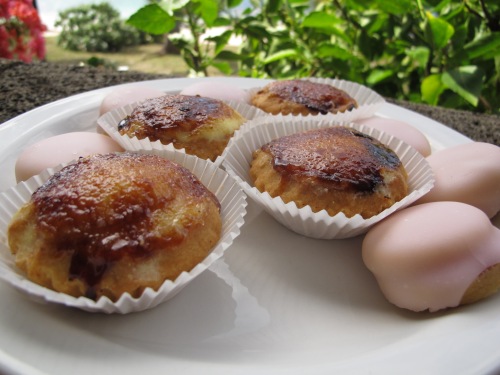 Mauritius, as you’ll be realising by now, but as you’ll only truly appreciate when you sink your teeth into it, offers much, much more than sandy beaches, sunny skies, and sapphire oceans.  That it’s a gastronomic paradise as well is one amongst its many other dimensions.  Enjoy your trip – and bon appetit! 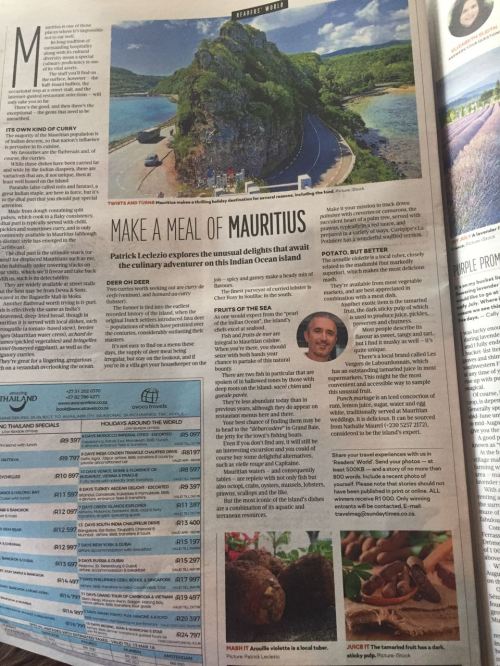