This is the Chivas life

After my recent tasting of Pride I began to see myself as a bit of a whisky hero.  I’d ripped back that dram with what I was coming to believe was a practiced hand.  Yes, it’s true that I drive around on a scooter, but such realities fade after a few drinks.  From now on when it comes to whisky the sky would be the limit.  In a field of barley when I called it they would come!

Ok, who am I kidding?  That delusion died quickly. In the real world I embrace thrifty efficiency as a way of life…although I’ve heard others describe my philosophy in somewhat less glowing terms – water off a duck’s back.  Anyhow, it was thus somewhat out of character when I made the decision to break the seal on a bottle of Chivas Brothers 30yo that I’d been hoarding for some time. 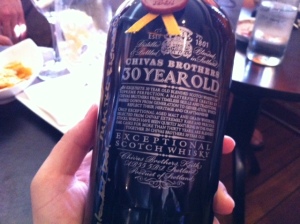 Out into the light

My thought process was as follows:

–        Further, mine just happened to be signed by Master Distiller Colin Scott – making it a limited edition of a limited edition and adding I’d hazard about 20% to its value.  So let’s call it at R6k, or just over.

You’ve now probably guessed that I didn’t buy this bottle myself, and you’d be correct.  It was a gift from my erstwhile employer, Seagram, given to certain staff on the event of Chivas Brothers’ 200th anniversary (2001).   The special occasions for which I’d been saving it had come and gone, the bottle either forgotten or the opening thereof deferred.  My major remaining milestone is the arrival of my first-born, but I reckon I’ll need my wits about me if and when that happens.

So, sometime last year, I thought #u%& @t, I’m going to crack this bad boy.  Perhaps it was a remnant of Pride-induced grandeur, perhaps it was a stupor induced by who-knows-what, or perhaps, just perhaps, it was a glimmer of good sense.  Whatever it was I don’t regret it for an instant.  You should look back on life as a collection of the greater moments, and this one was epic.

How was I to go about executing this brave decision though?  I quite enjoy the expression “to cast pearls before swine”.  It tickles my fancy…I can almost hear the crunching noises.  Needless to say it’s a situation best avoided.  This whisky had to be properly appreciated.  It was a MUST.  The answer was simple enough – I would share it with some of Cape Town’s pre-eminent whisky personalities, most of whom I’ve come to know as both fellow travellers and friends.  We would also quest for the glory of documenting what I believe is this whisky’s first set of tasting notes, although I can’t 100% verify that this would be either glorious or true.

In attendance at the cathedral (the Bascule) were Candice Baker and Niel Hendriksz, the charming ambassadors for Glenmorangie, Macallan and other esteemed whisky brands, Bernard Gutman, that local whisky legend of prolific extent, Marsh/Miles/Mash Middleton, Whisky Magazine’s editor of the ether, and, of course, yours truly.  A quick aside: big thanks George for allowing me to bring in the bottle so that we could enjoy it in appropriately ‘Grace-ful’ surroundings.

And so it was that on a picture perfect Cape Town afternoon, the five of us seated ourselves adjacent to some luxury yachts – owned by people who probably drink this dram daily, curse them.  Things started badly.  The cork broke eliciting some momentary panic.  This though was quickly resolved with a fine sieve.  Disaster averted we cascaded the golden liquid into our glasses and sat back to ponder this whisky, whisky in general, and just about everything else.

I’m not really a tasting notes kind of guy.  So despite coming up with this quest I didn’t have the diligence to actually make any notes.  Luckily some of the others were more conscientious so I have some fairly reliable information to add to the flotsam left in my memory.

Elegant, dark bottle with dodgy cork closure.  Simple board box with silk-like fabric covering the interior.  Adequate in 2001.  Somewhat below par in the current era of decadent over-the-top presentation.

A classic heavy-hitting blend.  Luxuriant, but stops short of mind-blowing.

Drinking the fair share that I appropriated for myself I felt like a bear drizzling honey down its throat.  I was lightly toasted by the time I left and I couldn’t help but reflect that I was on whisky buzz that could best be described as premium.  There would be no ill-effects. 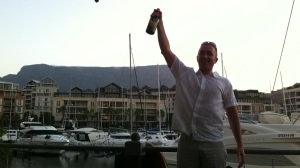 A gift from the gods. Ok, actually from Seagram – more bootleggers than gods. You get the idea.

It was an afternoon to be savoured for a long while.  The chaps made some noises about regular gatherings to enjoy fine whisky of the same ilk, so I wait with bated breath to see with what they’ll come up.

From me on this fine February evening – may the dram be with you!

Like Loading...
This entry was posted in Uncategorized and tagged Chivas Regal, Glenmorangie, Tasting, Whiskey, Whisky. Bookmark the permalink.

11 responses to “This is the Chivas life”