Whisky on the not-so-cutting edge

Posted on 17 October 2012 by Patrick Leclezio | Leave a comment 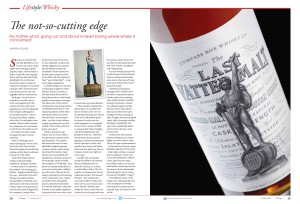 Someone recently told me that Blackberry is on its way out, eaten up by Apple and Samsung, as good as gone, kaput.  I had no idea.  It doesn’t seem like too long ago that it was the next best thing.  Admittedly I’m not the best barometer when it comes to mobile technology.  I’m currently using my wife’s hand-me-down and I always seem to be one upgrade behind everyone else.  My finger is so far from its pulse that I wouldn’t know what was happening in this market until two years later.  Regardless it can’t be disputed that change is taking place at a breakneck pace – driven by rapid innovation.  Whisky, with which I’m decidedly more familiar, offers a stark contrast by comparison.  It’s an industry in which true innovation is rare – its product has been made in largely the same way for centuries.  Here it is heritage more than anything else which is the key to success: the common thread amongst the world’s big whiskies is that they’ve all been around for a while.

Unlike the cellular phone whisky is old and deeply traditional.  Change is resisted – in many cases it is institutionally resisted.  The running gun battles – hugely entertaining by the way – between the Scotch Whisky Association (SWA), the guardians of industry, and John Glaser, the most maverick whisky maker in living memory, have become almost legendary.  His company, Compass Box, named Innovator of the Year on four separate occasions by Whisky Magazine, has continually attempted to push the boundaries.  Most recently he and his team cocked a snook at the SWA with the release of their “Last Vatted Malt” – a dig at the latest regulations.   In reality though, as inventive as these guys might be within whisky’s narrow confines, a few oak staves here and few hazy blends there would hardly qualify as innovations amongst the Steve Jobs of this world (may he rest in peace).  Compass Box has prospered but I sometimes think that it’s the resultant publicity rather than the actual merits of its inventiveness that is more responsible – and this is said without casting any aspersions on the quality of the whisky, which is good, very good.

Whisky, during its long history, has of course seen a few genuinely transformative developments.    The column still paved the way for more affordable supply in greater volumes.  Blends, which today dominate the market, made whisky more acceptable and palatable to a broader spectrum of people.  More recently, the inception of “finishing”, also known as double maturation or even extra maturation, added a new diversity of flavour to the whisky repertoire by introducing exotic casks (port, rum, cognac and others) into the ageing process.  But these have been few and far between.  Today the industry is too tightly regulated to permit much more than a few Compass Box-type peculiarities.

I often wonder whether this status-quo is in our best interests as whisky lovers.  Are we not perhaps missing out?  Would it not serve the greater good to loosen the reins and see what happens?  I’m a renegade at heart so I’m always thrilled to see guys like Glaser tangling with the Establishment and giving the what-for.  The limits should to be tested, and the agendas of entrenched interests need to be kept in check.  But equally there must to be limits, otherwise this path may take us to places where we might not want to go.  Consider this eventuality: would the addition of external flavours (blasphemy!) not make for a better, or at least a worthwhile, whisky?  This is a realistic consequence of uncontrolled innovation.  The answer?  Perhaps – but would such a concoction still be whisky, the drink we’ve come to know and love?  Whisky’s identity, and indeed its value, comes from its connection to the past and from its mystery, rather than from any kind of mechanical functionality with which to be played and manipulated.   It is only whisky because five hundred years of documented history (and several hundred more lost in the mists of time) have told us that that’s how it should be made.

I attended a tasting not long ago which reinforced to me why I’m passionate about whisky rather than anything else, cellular phones included.  During the function I tasted two whiskies aged in similar Oloroso sherry casks (probably sourced from the same bodega):  the first younger (a 1992 vintage), the second significantly older (a mystery whisky).  Strangely, inexplicably, the 1992 was considerably darker and its sherry flavours more pronounced.  Furthermore the mystery whisky exhibited citrus notes – highly unusual in sherry casks.  This is the type of phenomenon – in this case the visceral, unpredictable organicity of the casks – that makes whisky so special and so enigmatic.  There may not be the potential to release a new app every few days, but whisky makers can and do build better mousetraps just by focusing on the fundamentals and leaving the rest to a time-honoured, intangible “magic”.  In its different casks, in the shape of an individual still, and in its varying terroir whisky has the power to surprise and to astound.  May the dram be with you!