Posted on 7 December 2012 by Patrick Leclezio | Leave a comment

Take it up a notch. You deserve it. It’s been a long year. Here are my picks to amplify the festivities this season.

First published in Prestige Magazine (Best of the Best edition 2012). 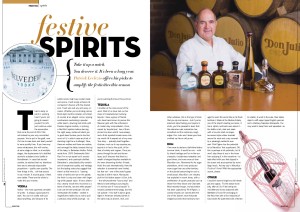 There’s really no point in working hard if you’re not going to reward yourself.  So let’s just continue under the assumption that come the end of 2012 this will indeed be your very committed purpose.  You’ve put in the graft, now it’s time to ease back and treat yourself to some quality time.  If you have any sense whatsoever this will involve, at some stage or other, or at multiple stages, the displacement of a distilled alcoholic substance from bottle to bloodstream.  In case that sounds cavalier be advised that my intentions here are to advocate responsible proportions – quality over quantity.  The finer things in life…roll that around in your mouth.  It sounds good, it feels even better.  These are the elixirs to make this your mantra.

Vodka – the most supremely versatile of spirits – is always a good place to start.  You can mix vodka with just about anything, and because of its subtle (some might say neutral) taste and aroma it’ll simply enhance its companion’s flavour with the desired kick. It will also suit any and every occasion.  Whether you’re drinking James Bond-esque martinis (shaken not stirred of course) at an elegant soiree, sipping sundowners overlooking a powder-white beach, downing iced-shots with Russian lingerie models, or priming a Red Bull injection before dancing away the night, vodka will stand you in good stead (unless you’ve had too much of it, in which case any kind of standing might be a challenge).  Now, there are vodkas and there are vodkas, and amongst the latter, towards the top of the heap, is Belvedere Vodka: Polish, made from 100% Dankowskie Gold Rye (I’m no rye expert but it sounds impressive), and quadruple distilled.  Belvedere is undoubtedly silky-smooth and of exceptional quality and heritage, but the tasting notes also suggest that there’s a little more to it: “Leaving notes of vanilla and rye on the palate, the finish is crisp and clean with lingering white pepper spice. It has a distinctive, creamy mouth feel. Its aroma is a blend of vanilla, rye and white pepper”.  Look out for their jeroboam (3l) and methuselah (6l) bottles – seated in magnificent cradles (so as not to spill a precious drop whilst pouring) – as you’re painting the town this summer.

I shudder at the mere sound of the word. Most of us have had our fair share of misadventures involving tequila. I have a group of friends who have been known to pursue this Mexican gold with the enthusiasm of modern-day conquistadors. Once, crazed by ‘tequila feva’, two of them pinned me down whilst I was asleep, and a third squirted tomato sauce into my mouth till it seeped out of my nose. True story…probably best forgotten.  Anyhow, much as it may surprise you tequila is in fact a fine spirit, of the likes of whisky and cognac.  Once you pierce through the salt-and-lemon layer you’ll discover that there’s a wealth of elegant tequilas available to the more discerning drinker.  At least that’s the case internationally.  Here the selection is somewhat more limited; but fear not one of the world’s great tequilas is within reach.  My tequila pick for this festive season is Don Julio – the self-proclaimed “luxury drop” and Mexico’s best-selling luxury tequila.  I’m not too if “luxury tequila” is industry standard terminology but let’s not quibble – this stuff is damn good.  Aged in American whiskey barrels in the same way as is Scotch, Irish, and other whiskies, this is the type of drink that you sip and savour…but if you’re adamant about taking your tequila in shots you’ll be pleased to learn that the extensive cask maturation has smoothed out the customary rough edges: Don Julio won’t leave your face crinkled up like an old prune.

If we were to declare a definitive festive summer drink it would be rum – with its island heritage and fun-in-the-sun character it epitomises relaxation and good times; and none more so than Mauritian rum.  Renowned for its sugar plantations, which once produced more sugar than any other territory on the planet – astounding for such a small place, the island’s rum industry has exploded in recent times, with a proliferation of superb products such as those from New Grove and Chamarel.  Most recently though my fascination has been captured by Pink Pigeon, a vanilla-infused rum named after the one of the island’s more fortunate indigenous birds (that narrowly managed to avoid the same fate as its Dodo brethren).  Made at the Medine Estate, one of islands leading sucreries, it is has a stylish, laid-back aura about it – the bottle is tall, dark and sleek with a he-who-shall-no-longer-be-named style rubber bracelet around its neck and a cap covered by a pleasingly authentic wax seal.  Pink Pigeon has the potential to be the island’s first superbrand.  Ok, this is perhaps a bit optimistic but it won’t stop those of you in the know from enjoying it in the meantime – to best effect with your feet dipped in the ocean and accompanied by some sega music.  As they say in Mauritius – Position? Korek!  With the appropriate accent please.

I wouldn’t want to forget my old friends gin and cognac. ‘Tis the season to be jolly, after all.  So I’ll be having my mid-afternoon tonics seasoned with Beefeater 24 and I’ll be bringing in the New Year with a few measures of Courvoisier XO (partnered with a Romeo y Julieta).  A word to the wise: their labels depict a stiff-upper lipped English yeoman and a shadowy Napoleon Bonaparte.  You may want to keep them well separated.