The beauty’s in the botanicals

What kind of far-fetched absurdity has concocted a narrative where James Bond’s drink of choice is a vodka martini?  Patrick Leclezio makes the case for gin. 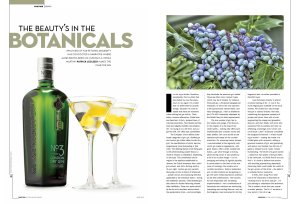 I’m not a gin drinker.  Somehow, inexplicably, this is a drink that has eluded me over the years, much to my regret.  It’s a habit that I’m determined to acquire though, because I’ve come to realise that there are moments when nothing but gin will do.  Think balmy, summer afternoons. White linen and bare feet.  A thick, terraced lawn of colonial proportions.  Fast friends and fine food and (slightly) fuddled conversation. Ok, I’m laying it on a bit thick, but you get the drift.  Gin offers epic possibilities.

The European Union defines three broad categories of gin: gin, distilled gin and London gin (often called London dry gin), the specifications of which become progressively more demanding in that order.  The defining feature of all these gins is the predominating juniper flavour, a result of infusion or distillation, depending on the type.  This constitution has its origins in the tradition established by Jenever, the Dutch forerunner from which gin evolved, and still a thriving spirit in its own right.  London gin only permits flavouring via the inclusion of botanicals – juniper and an accompanying selection applicable to the individual brand – during the distillation process, whilst distilled gin also allows for further flavouring infused after distillation.  These two styles should be the focus for anybody serious about the appreciation of gin – and accordingly they dominate the premium gin market.  There are other minor “named” types which may be of interest: for instance, Plymouth gin, a Protected Geographical Indication, of which the only exponent is the eponymously named brand, and Navy-Strength gin, which is distilled to the 57% ABV historically stipulated by the British Navy for their requirements.

The true wonder of gin lies in the variety and energy of its flavours.  In this respect it is the king of the white spirits – nothing else offers such sophisticated and complex aroma and taste profiles.  Gin once served as the standard spirit base for the cocktail revolution.  On reviewing classic recipes I was astounded at the regularity with which gin made an appearance, with good reason.  After a brief, undeserved hiatus – gin went through a niching period during which it was tainted by a bit of an ou-doos image – it is re-emerging and taking its rightful plaudits, to some extent on the back of the new wave of mixology (the modern era’s cocktail revolution). Today’s bartenders and cocktail creators are recognising in gin the same enhancing flavour potential as did their predecessors.  The industry too has responded with increasing experimentation – new combinations of botanicals and infusions are introducing interesting and exciting flavours, such as the Bulgarian rose (renowned for its fine fragrance) and cucumber prevalent in Hendrick’s gin.

I was fortunate recently to attend a tutored tasting of No. 3, one of the more elegant gins available on the local market.  We worked our way through this gin in various formats: first neat, underlining the signature explosion of juniper and citrus, then with a twist, augmenting the orange and grapefruit flavours, and then finally with tonic (the awesome Fitch & Leedes) and lime, as refreshing a beverage as for which one could hope.  Later I studiously completed the assigned homework:  I mixed myself a gin martini – coating the inside of chilled glass with vermouth, adding a generous measure of gin, and garnishing with lemon rind, twisted over the top of glass to release its oils.  Quite. Simply Outstanding.  The secret of a good martini – aside from the quality of the gin itself – is the vermouth:  try Noilly Prat if you can find it.  I was left wondering how anyone possessing anything approaching reasonably discerning taste could prefer the vodka to the gin version of this drink – the latter’s a veritable flavour avalanche.

In the song Piano Man by Billy Joel one of the characters is described as “making love to his tonic and gin”.  I’m just starting to understand the sentiment.  This is indeed a drink that can inspire a certain passion.  The G and T set have a new recruit.  Chin chin!

2 responses to “The beauty’s in the botanicals”