A phoenix from the ashes

Posted on 5 August 2013 by Patrick Leclezio | Leave a comment

From expired discard to fine spirit. Patrick Leclezio indulges in some renaissance culture. 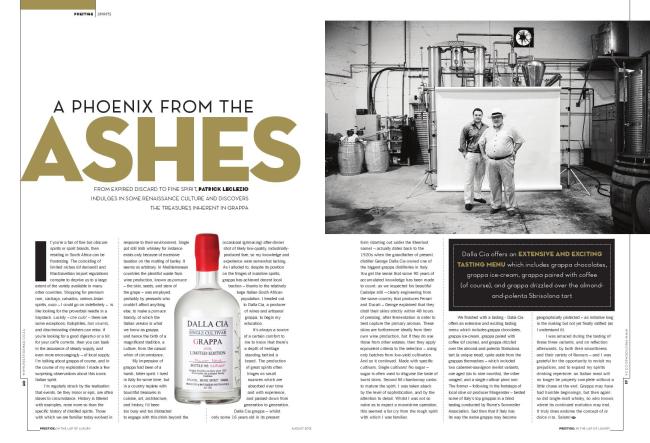 If you’re a fan of fine but obscure spirits or spirit brands, then residing in South Africa can be frustrating.  The coinciding of limited niches (of demand) and Machiavellian import regulations conspire to deprive us to a large extent of the variety available in many other countries.  Shopping for premium rum, cachaça, calvados, various Asian spirits, ouzo, I could go on indefinitely, is like looking for the proverbial needle in a haystack.  Luckily – che culo! – there are some exceptions; Italophiles, bon vivants, and discriminating drinkers can relax: if you’re looking for a good digestivo or a hit for your caffè corretto then you can bask in the assurance of steady supply, and even more encouragingly – of local supply.  I’m talking about grappa of course, and in the course of my exploration I made a few surprising observations about this iconic Italian spirit.

I’m regularly struck by the realisation that events, be they minor or epic, are often slaves to circumstance.  History is littered with examples – none more so than the specific history of distilled spirits.  Those with which we are familiar today evolved in response to their environment.  Single pot still Irish whiskey for instance exists only because of excessive taxation on the malting of barley.  It seems so arbitrary.  In Mediterranean countries the plentiful waste from wine production, known as pomace – the skin, seeds, and stem of the grape – was employed, probably by peasants who couldn’t afford anything else, to make a pomace brandy, of which the Italian version is what we know as grappa; and hence the birth of a magnificent tradition, a culture, from the casual whim of circumstance.

My impression of grappa had been of a harsh, bitter spirit.  I lived in Italy for some time, but in a country replete with bountiful treasures in cuisine, art, architecture, and history, I’d been too busy and too distracted to engage with this drink beyond the occasional – grimacing – after-dinner shot of likely low-quality, industrially-produced fare; so my knowledge and experience were somewhat lacking. As I alluded to, despite its position on the fringes of mainline spirits, grappa has achieved decent local traction – thanks to the relatively large Italian-South African population.  I headed out to Dalla Cia – a producer of wines and artisanal grappa – to begin my education.

It’s always a source of a certain comfort to me to know that there’s a depth of heritage standing behind a brand.  The production of great spirits often hinges on small nuances which are absorbed over time and with experience, and passed down from generation to generation.  Dalla Cia grappa – whilst only some 16 years old in its present form (starting out under the Meerlust name) – actually dates back to the 1920’s when the grandfather of present distiller George Dalla Cia owned one of the biggest grappa distilleries in Italy.  You get the sense that some 90 years of accumulated knowledge has been made to count: as we inspected his beautiful Cadalpe still – clearly engineering from the same country that produces Ferraris and Ducatis – George explained that they distil their skins strictly within 48 hours of pressing (after fermentation) in order to best capture the primary aromas.  These skins are furthermore ideally from their own wine production, but if they do use those from other estates, then they apply equivalent criteria to the selection – using only batches from low-yield cultivation.  And so it continued.  Made with specific cultivars.  Single cultivars! No sugar – sugar is often used to disguise the taste of burnt skins.  Second fill chardonnay casks to mature the spirit. I was taken aback by the level of sophistication, and by the attention to detail.  Whilst I was not so naïve as to expect a moonshine operation this seemed a far cry from the rough spirit with which I was familiar.

We finished with a tasting – Dalla Cia offers an extensive and exciting tasting menu which includes grappa chocolates, grappa ice-cream, grappa paired with coffee (of course), and grappa drizzled over the almond-and-polenta Sbrisolona tart (a unique treat), quite aside from the grappas themselves – which included two cabernet-sauvignon merlot variants, one aged (six to nine months), the other unaged, and a single cultivar pinot noir.   The former – following in the footsteps of local olive oil producer Morgenster – bested some of Italy’s top grappas in a blind tasting conducted by Rome’s Sommelier Association.  Sad then that if Italy has its way the name grappa may become geographically protected – an initiative long in the making but not yet finally ratified (as I understand it).

I was amazed during the tasting of these three variants, and on reflection afterwards, by both their smoothness and their variety of flavours – and I was grateful for the opportunity to revisit my prejudices, and to expand my spirits drinking repertoire: an Italian meal will no longer be properly complete without a little chase at the end.  Grappa may have had humble beginnings but then again so did single-malt whisky, so who knows where its continued evolution may end.  It truly does endorse the concept of la dolce vita.  Salute!