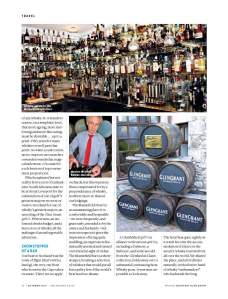 “To see a world in a grain of sand”. I was reminded of Blake’s words – perhaps in a less metaphorical sense than he had intended – as I watched Sergio Garcia visit the 15th hole bunker at Hoylake during the final day of the 2014 Open Championship. It was a portentous moment. I joined the surge to the green, knowing, like everyone else in that gallery, that the fate of the title might well rest on whatever happened next. This was golf appreciation at its pinnacle – the decisive period at the game’s home major. The atmosphere was simply electric.

The rest of course is history. Garcia fluffed his trap shot and his challenge disintegrated. Instead of holding infinity in the palm of his hand, there was probably just a fist clenched in frustration. I was disappointed, but only mildly so; my horse might not have come in but it had been an epic day on a fantastic links course (luckily with distinctly unlinks-like weather – my British fellow course-goers were for the most part tinted bright red). I returned to drown my sorrows, such as they were, at the Champions Club, our opulent (remember that word) hospitality area, with the rest of our major-going party – actually, let me qualify that: our double-major-going party. A group of us had flown to Britain, less for the golf than for another major – a whisky major.

In whisky the equivalent of a major, the prizes to which most patrons of the golden nectar aspire, are the old and the rare – most conventionally manifest in the form of a 50 year old. These are the “big shows” of the whisky world, eagerly awaited and widely publicised.

It might be useful at this point to consider what the age of a whisky entails, and why 50 years of it might be regarded to be so special. The ageing phenomenon is called maturation and it occurs through contact with wood, in casks made from oak. A whisky can only age in maturation – once it is decanted from a cask it is in a sense frozen in time. During maturation the whisky absorbs flavour from the cask itself (vanillins and tannins naturally present in the wood), from the liquid that preceded it and that remains impregnated in the cask (most commonly Bourbon or Sherry), and, less overtly, but in many cases distinctly nonetheless, from the cask’s environment as it breathes. The whisky also reduces in alcoholic strength during this ageing process – a result of evaporation (the twee-named Angel’s Share). The broad (and very important) result is a mellowing and flavouring of the liquid. In fact it’s widely acknowledged that maturation is the single factor that makes the greatest contribution to the flavour of any whisky. So it stands to reason, on a very simplistic level, that more ageing, more mellowing and more flavouring, must be desirable…up to a point. 50 years for many whiskies is well past that point, so when a cask continues to improve as it marches onwards towards that magical milestone, it’s cause for a celebration of top tournament proportions.

Which explains (but not really) how a crew of enthusiastic South Africans came to be at Royal Liverpool for the culmination of golf’s greatest major: we were on route to Scotland for one of whisky’s greatest majors – an unveiling of the Glen Grant 50YO. Sixteen men, an unlimited drinks budget, and a fierce love of whisky: all the makings of an unforgettable adventure.

Our base in Scotland was the town of Elgin (that’s with a hard-g good people), the very one from which ours in the Cape takes its name. There were no apple orchards here, but this was more than compensated for by a preponderance of whisky, nowhere more so than at our lodgings. The Mansefield Hotel is an unassuming place; it is comfortable and hospitable – we were frequently, and graciously, attended to by the owner and his family – but in most respects it gives the impression of being quite middling…an impression that is dramatically arrested and turned on its head at sight of its bar. The Mansefield bar is quite simply a showstopper, boasting a selection of whiskies that would put all but a paltry few of the world’s best hotels to shame. A Glenfiddich 50YO in alliance with various 40YO’s, including a Dalmore, a Balvenie, and some 60 odd from the Glenfarclas Clans collection, holds sway over a substantial, entrancing host. Whisky porn. It was near impossible to look away. The hotel has quite rightly as a result become the accommodation of choice in the area for whisky tourists from all over the world. We shared the place, and a few drinks naturally, with a festive band of whisky “ambassadors” who’d made the long pilgrimage from Hong Kong – an impromptu coming-together of the whisky brotherhood in one of whisky’s truly special places.

The highlight of the trip, indeed the purpose for which we’d teed up at the start, was of course -and I say “of course” with some contemplation, not because I’m doubtful of its veracity, but rather because it demanded something exceptional to qualify so obviously for the accolade – our visit to the Glen Grant distillery, to crown this much anticipated champion dram. The other contenders clamouring for the honour had included a personalised tour of Old Trafford, a cruise on Loch Ness, a round of golf at Castle Stuart, clay pigeon shooting, the aforementioned attendance at the Open, and a one-after-the-other succession of exquisite meals – we’d gorged ourselves on Scottish salmon, scallops, steaks of Aberdeen Angus, and haggis with neeps and tatties, accompanied by a repeating roll-call of delicious Sancerres, Barolos and Chateauneufs du Pape with which to wash it down. Did I say opulent? These though were all about to take a back seat.

We’d prepared for the visit by topping up our Glen Grant education at the Mansefield. No-one in their right mind plays a major without substantial practice – and then a bit of loosening up on the range before the start of the round. Back home we regularly get to enjoy the Glen Grant Major’s Reserve, the 10YO and the 16YO. This is the distillery’s core range – incidentally representing some of the best value single malt drinking on the market – with which we wasted no time in reacquainting ourselves. Occasionally, it also releases a few limited editions, most recently the 170th Anniversary edition, last seen in SA some two years ago, and the Five Decades, which came and went in a blur last year. I’d lamented the latter’s brief existence. It was an outstanding whisky: rich, creamy and full-flavoured – but I’d resigned myself to its expiry. So it was with no small measure of joy – a high-five dispensing type of joy – that I noticed a few bottles behind the bar, accompanied by the 170th no less. We sipped these drams into the wee hours with a it’s-hard-work-but-someone-has-to-do-it stoicism, retiring only when we felt ready to tackle the big one.

Now, I’ll be perfectly honest with you. Once you’ve seen the inner workings of one distillery, you’ve almost seen them all. A few have their own maltings, all but a few have their own unique stills, and there’s always a bit of variation here and there, but for the most part it’s more of the same. I’ve visited a dozen odd in my time, and whilst it’s always interesting to delve into the processes, there’s a limit to how excited I can get about it. In this respect however the excursion to Glen Grant – the 50YO moments not even counted – was an absolute exception, for two reasons.

Firstly, for any whisky loving layman, a distillery is less about its industrial functioning than about the setting (and the stories). Atypically for what are essentially factories, they tend to be quaint structures located in pretty surroundings – much like a clubhouse and its golf course. In that sense Glen Grant is the Augusta National of distilleries – its charismatic beauty is nothing short of exceptional. The bubbling burn, the stone buildings, and coach-house-cum-visitors-centre paint a picture of olde worlde elegance, that is then elevated to fine art by a glen of elaborate, splendorous gardens. And even there amidst the trees, flowers and birds, the presence of whisky is never far away – we were delighted to stop for a dram at the “secret” whisky safe set into the rock in the upper reaches of the garden.

Secondly (two reasons, remember), our tour of the distillery was conducted by the man who runs the place and makes all of its important whisky decisions – Scotland’s longest-serving Master Distiller, straight-talking Glen Grant supremo Dennis Malcolm. It puts a different spin on things when the guy who pulls the strings is the one who’s showing you around.

The big moment when it came was a spiritual experience. I’m never going to raise the claret jug (or any kind of golfing trophy for that matter), but holding that precious liquid gifted me with just an inkling of how that must feel. We put mouth (and nose – never forget the nose) to glass in the dunnage warehouse, the squat, thick walls imbuing the space with a cool, reflective quiet, the stacked rows of casks with a reverent, imposing gravitas. Few would get to drink this nectar, fewer still would drink it here on such hallowed ground. The whisky when it permeated my senses was big, very big, almost overwhelming, as one would expect from something this ancient; the pool of flavour so profound that it seemed to be reaching back, drawing from each and every one of those 50 years. This was eternity in an hour. May the dram be with you.

4 responses to “A Scotch major”