The song of the single cask

Posted on 21 September 2015 by Patrick Leclezio | Leave a comment

How bias governs the malt universe, and why it doesn’t matter. Patrick Leclezio runs the rule over blended malts, single malts, vintages and single casks. 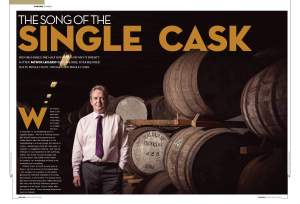 As it appeared p1.

As it appeared p2.

With whisky there is the spirit and then there is the story. And make no mistake the story is important. In his bestselling book on cognitive biases: “The Art of Thinking Clearly”, Rolf Dobelli explains that people have an innate need to seek the meaning in or the understanding of a thing through the vehicle of a story – something he calls the ‘story bias’. A narrative – a suggested meaning – that may be irrelevant or inconsequential to the underlying matter, such as the concept of single malt is to the actual, real quality of the whisky for instance, can nonetheless be found to be irresistible and compelling. Whisky lovers, as much as we’d want to deny it, are not immune to this logical lapse – but whether it’s a problem in this sphere, ignoring the ostensible exploitation of pricing by producers, is less evident. I’ve always found that even if certain factors don’t affect the liquid they may well indirectly influence a person’s perception of the liquid. This is whisky after all, not the Matrix – we’re not being deceived so much as inspired.

Have you thought about the differences between blended malts and single malts? I mean really thought about it. The malt whisky universe is categorised into four types: blended malts and single malts, as a start, and then the latter further into “regular” single malts, vintages, and single casks. Typically, all other things being equal, pricing tends to correspond to the order that I’ve listed, because that’s the order in which they’re valued by whisky buyers. Yet, as much as we see these types as distinct, there’s no actual physical difference between any of them. They’re all made from the same ingredients (malted barley), using much the same production and maturation processes (specifically the copper potstills and oak casks that are so important to the flavour). The difference is only in the story – and what a lyrical story it is.

The concept of single malt is rooted in its unique source and single point of origin. This is the theme that drives its story – although, as an aside, it’s worth nothing that some have strayed slightly from the script: many distilleries don’t mature on site. It goes something like this (in my own words, no insincerity meant, the tangible reality notwithstanding, I believe it and I intend it). These whiskies embody a singular terroir and style: their unique stills, their local water, their people, focused on a coordinated, defined, unified purpose, for the most part multiple generations in the making, their heritage, and indeed their very air, the breath in their casks, set single malts apart from other whiskies. They are pure, distinctive, rare and limited – and bound to their birthplace – and each individual single malt is a critical point, one of many, on the map that makes whisky the great, complex, varied, and much-loved spirit that it is today.
These are the melodic sounds that have catapulted single malts deep into the popular imagination. It’s not much considered by the casual whisky drinker but in fact most single malts are in fact blended (or, more correctly, “vatted”) – different casks of different wood from different years can be and are typically used, to give the blender enough range to maintain flavour consistency from one bottle to the next. The succeeding verses, whilst more specialised, are in much the same vein. Vintage single malts are slightly more specific; only whisky distilled and put into casks in the prescribed calendar year can be used in these vattings. Here flavour consistency is less important – or often disregarded. The appeal of the vintage plotline is that whilst each bottling might reflect a broad distillery style they will vary from one another; each will offer something new, something different, and something limited in an absolute sense i.e. once the vintage has expired then that’s it, it’s over and done, for ever. The outstanding Balblair distillery offers outstanding exponents of vintage whisky – with subtle, interesting variations of their primary philosophy of bourbon cask maturation, to the odd wild deviation, such as the excellent sherry matured 1990. The final type, the single cask, is the apex, the chorus: one source, one year, one cask…(although these can be double matured or finished). The ties to its heritage, always important if not definitive with whisky, are particularly strong here – single casks explain its history. They are the origins of the story, whisky at its  purest and most unadulterated.

All of this though is pure romance. There is nothing that a single malt can do, that a blended malt cannot do better. In fact as one moves up the value trajectory, from blended malts to regular single malts, and then to vintages and single casks, as a whisky maker one becomes increasingly limited. In terms of the hard science this inflating status is counter intuitive. Blended malts can summon all of the intrinsic advantages of the others, and then can add to these – by calling on its blender’s palette, at least in theory – an unlimited potential for variety and complexity.

I challenge you however to name ten blended malts, off the top of your head. You’ll struggle. Five? The fact is that there’s just no story. No quaint distillery, no home in a craggy corner of Scotland, and no shiel-wielding old-timers, working the same malt as their grandfathers, and their great-grandfathers before them. They just don’t have the same ability to inspire. This might afford us a new appreciation for the potential of blended malts but it shouldn’t dampen our enthusiasm for single malts, vintages or single casks in the slightest. The story counts for something. Enjoyment does not need to be rational. The single cask serenade may influence my appreciation of the sumptuous Private Barrel Company GlenDronach 20YO that’s currently cradled in my hand, but it’s a positive influence, so why fight it. We’re human, and these are two hand-in-hand human vices – whisky and whimsy – that we should be able to enjoy without restraint. May the dram be with you.