Running on the roof of the world

A tribute to the Himalayan. Patrick Leclezio reports on one of ultra-running’s unique races.

Running brings out the best in people. It may be because we are born to it and that it is our essential state of being, if you accept (as I do) the theory proposed by Christopher McDougall; it may be because it challenges us to strive for many of the finer human qualities – discipline, persistence, and courage; or it may be, perhaps, because it inspires us to respond to adversity from a deep and pure place within ourselves. There’s just something about running that motivates us to reach for our better selves, or at least parts thereof. Now I don’t claim that this observation will stand up to any kind of scientific scrutiny, but it’s how I felt recently after watching a party of some thirty odd participants attempt the epic Himalayan 100-Mile Stage Race. I bore witness to a group of runners doing some amazing things.

The Himalayan takes place over five gruelling days covering some of the most spectacular, but arduous, terrain imaginable. Run in the Darjeeling region of West Bengal in Northern India, it is as idiomatically far removed from a cup of the local produce as you could possibly fear to expect (and fear you should, at least somewhat). The race straddles the Nepalese border for much of its course, covering some ridiculous elevations, and reaches an oxygen-scarce altitude of almost 3700 metres. I may not be ultra-running fit, but I am fit – yet at this height above sea level even a light uphill stroll gave me pause for thought. Throw in the elements – we experienced rain, hail and bitter cold – and it became clear why this type of running is considered an adventure sport, and why this race is touted to be India’s premier adventure event. As I found the Race Director (and founder), the inimitable and voluble C. S. Pandey, to be fond of saying: an adventure is a “calculated risk”, and indeed the Himalayan delivered its fair share of uncertainty, on this its 25th anniversary as I’m guessing it did in previous years, for many if not most of the competitors.

The first stage sets out from Mane Bhanjang at some 1900m and climbs to the race apex at Sandhakphu, delivering gradients of hair-raising steepness during its course, uphill naturally, but also downhill – prompting I’m sure the disheartening sense of gains being given up in the progress towards this formidable summit. As a runner finishing in the cold and wet, on the verge of hypothermia, or ailing from altitude sickness, or just tired, sore and depleted, that first night, with sleep at such an unaccustomed altitude difficult, the thought of getting up to do it all over again the next day would have been a serious test of will. Yet get up they did, to a man (and woman, as the case had been).

The most, but by no means the only, remarkable example, was one my media companions, Helmut Linchbichler of Austria, a 74 year old, third-time Himalayan veteran. He’d been one of those badly affected by the weather, prey to a logistical miscalculation in the deployment of his rain gear. His predicament had been further aggravated when he’d taken a tumble during a trail run in the week preceding the race, leaving his upper leg badly bruised. On arrival at the finish he was chilled to the bone and looked in bad shape. 25 miles of torture. Wet, glacial conditions. No jacket and little insulation. 74! This guy was done…or so I had thought. But when I got up the next day, warmly ensconced in my down jacket, there he improbably was, in his running gear, smiling and joking, looking ready for come what may. I had clearly underestimated the fortitude of the man, of the running mindset, and of the Himalayan spirit.

The first two nights, with the second stage doubling back on itself along the ridge line, were spent at the summit at Sandakphu, where we were afforded the opportunity to sight four of the world’s five highest peaks – a breathtaking, affirming experience, when the participants would have needed it most. Kangchenjunga in particular, the third highest, and the most impressive in terms of breadth, more a massif than a single mountain, is so close that you can almost reach out and touch it. The place is both magically beautiful, its position dramatic, its views unparalleled (virtually), and vividly stark, the accommodation spartan, the comforts few. It is the perfect backdrop to test yourself in and against the majesty of nature.

The third stage also happened to be a marathon, the 263rd (!) for one of the runners – RAF retiree David Green, although there was some debate over whether it was standard or not, never resolved because of the patchy GPS connections in the region. Regardless, it featured a tremendous, quadriceps-crippling descent to the town of Rimbik, a return to approximately 1900m, where if I was delighted then the runners, despite their stoic forbearance, must have been maniacally overjoyed, to become reacquainted with running water and hot showers. Our little lodge (Hotel Tenzing Sherpa), made excellent by the earlier deprivations, but a warm and friendly place of its own accord, also offered another, entirely unexpected treat, which would have been a major boon for the calorie-craving runners: a tagliatelle napoletana of Neapolitan standard (poetic licence, apologies), with what tasted like genuine parmesan cheese. To suggest that this was surprising in these rural backwaters – where I couldn’t even get my hands on Indian tonic water – would be entirely insufficient.

As the race wore on into the fourth and fifth stages, with any significant flat stretch of track still to be taken into evidence (did I say gruelling?), it gradually started to become clear that stage racing is a beast all of its own. Experience and holistic preparation (as opposed to just training) would be crucial. The Himalayan is more about participation than competition – something that would have been apparent to any bystander from the camaraderie that prevailed throughout. To underscore the point the 2015 participants were each amateurs. All the same it is a race and it had attracted some prodigious runners. Over the first three days the contest was hard-fought by three of these – a hugely talented, 18 year-old Canadian, the leader at that point, running his first race of the kind, and two highly practiced Australians. The Aussies, Tegyn Angel and Kellie Emmerson, eventual winners, were noticeably well equipped, and were set apart by a professional approach to their race nutrition, which started to tell in the latter stages. The aid stations provided small oases of respite and nourishment, but their fare of bananas, potatoes, biscuits and water wasn’t enough for peak performance. Taking nothing away from their own talent, and the immense discipline and determination that would have been needed to train for and run this event so effectively, I’m sure nevertheless that this supplementation played an important role in staying stronger, and, critically, healthier, when many started to wane.

Others too fought and won their own battles. An Englishman struck down by an adverse reaction to the altitude and by the lingering effects of a cold gutsed it out over the full five days and finished strongly, in an impressive display of stiff-upper-lipped resolve. An American woman struggled with diarrhoea – woe betide the person whose immune system lets down its guard in India! – but also persisted bravely, to the end. It was rousing stuff. Insanely admirable. At times I had to ask myself why. What was it for? All runners have their own reasons, their own motivations, but I think everyone is driven by the elation that comes with finishing, and, for a race of this scale and stature, that unbridled joy – at overcoming the obstacles, at surmounting the challenge, at completing the mission, at giving the best of yourself and not being found wanting – seemed enough reward in and of itself. It was an occasion that enhanced the lore of running. And, say what you will, scrutiny or no scrutiny, it was truly an experience that brought out the best. 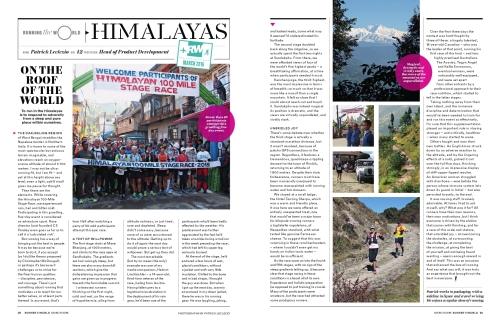 Like Loading...
This entry was posted in Uncategorized and tagged Himalayan 100 Mile Stage Race. Bookmark the permalink.

5 responses to “Running on the roof of the world”