Posted on 29 August 2016 by Patrick Leclezio | Leave a comment

Familiar and foreign both, Holland’s metropole strikes a poised balance as the ultimate place for a short city break.

I find myself in the fortunate position, courtesy of my work commitments, to be able to intermittently sojourn in a European city, typically for a long weekend.  The choice of destination is critical in this endeavour.  Given that these trips only manifest about once a year, so regularly but not often, and given the parlous state of the currency, I simply can’t face the prospect of disappointment.  The chosen city must therefore meet certain conditions – it must be convenient, distinctive, and interesting.  This year I opted for Amsterdam.  The conclusion, first – before you read on any further:  wau!  Or so the Dutch would say it.  The visit left me struggling to imagine any alternative that would have more emphatically fulfilled my criteria.

If your time is limited you don’t want to be dealing with multiple transfers and contorted logistics.  Amsterdam Schiphol is a direct flight on KLM, a single stop on a host of other airlines, and an easy connection from all the major (and many of the minor) European cities.  It’s then a short journey of 20-odd minutes from the airport to the city’s central station by train.

Foreign languages are part of the charm of a holiday abroad, a charm particularly poignant in Amsterdam because of the filial relationship between Dutch and Afrikaans.  But they’re also an impediment, especially during a short stay when you’ll have neither the time nor inclination to wrestle with a language barrier.  The Dutch, and probably Amsterdamers in particular, speak the best English in Continental Europe.

The city’s tourism organisation IAMSTERDAM offers cards for purchase which include all public transport, canal tours, museum visits, and discounts at shops and restaurants.  They’re handy, although I found that I rarely needed to use the trams and the buses – the city centre is condensed enough that if you’re at your leisure anything other than walking is largely unwarranted.

The places that etch their mark most profoundly on our consciousness, that live longest and most vividly in our memories, are the ones with their own, unique, individual character.  If you were wake up here with no recollection of where you were – this city, with its canals, bicycles and winching beams…and its “coffee” shops and red light district, would immediately reveal itself to you, and impress itself (favourably!) upon you.

Amsterdam has it all.  A deep and rich history.  A heritage of arts and innovation.   A broad culture encompassing food and drink, music and theatre, fashion and sports.  It’s a place of vibrant energy and unpretentious cool, endowed with a seemingly endless supply of things to see and do.

Taking its name from the music school previously resident, the Conservatorium Hotel occupies a heritage building, renovated and extended by Piero Lissoni.  The result is a blend of the traditional and the contemporary that creates a reassuring, luxurious elegance.  The place is a spoil, be warned, but it delivers throughout: from the unusual split level rooms, the superbly well-equipped gym, the sumptuous spa with its watsu pool, and the Asian restaurant (Taiko) with its certified sake sommeliers to the quirky decorations, the shopping gallery with its cigar club, and the host department, which gets in touch with you ahead of your visit to assess your requirements and offer advice. The highlight perhaps is the flagship I love Amsterdam suite, nudged from the spectacular that you would expect to the outrageously sublime by a viewing deck, accessed by a spiral staircase to the roof of the hotel, which offers wraparound views of the city.  My only caution would be that its location is set slightly outside the thick of things, but the hotel offers bicycles to guests (naturally!) as a remedy so this is a negligible concern.  If it’s beyond your budget to stay then stop in at the excellent brasserie – with its community table for solo travellers, what a simple but beautiful idea – for a meal of duck breast or pikeperch, both exquisite, washed down with a Petit Chablis, to take in the charm of the place.

In a city that is both rooted in its traditions and that pushes the boundaries I thought it was important to experience both ends of the spectrum.

This restaurant seemed so avant garde to me that I was taken aback to learn that it had been operating for some 25 years.  Patrons recline at tables set on large beds, whilst being entertained by DJ’s and a variety of unconventional performers – imagine a fusion of Madame Zingara’s and the Blue Oyster Bar.  I don’t think I was successful in bringing out my “inner travolta” as they urged me to do, but I made a great time of it nonetheless.  It goes without saying too that the food was sumptuous.  An iconic Amsterdam experience!

This family-run restaurant is an institution, having maintained persistent popularity since its inception some 40 years ago.  It’s a large place, but with its multiple dining areas enclosed into smaller separated spaces, with its decor of authentic Dutch furnishings, and with its friendly, chatty staff, an intimate atmosphere prevails.  Haesje Claes is a window to the past, to the old Holland of the seafaring age – I imagined myself a sailor, freshly stepped off a ship from the Indies, as I devoured a much anticipated meal of my favourite pea soup and stamp potten (a stew of sorts), whilst my wench, delighted at my return, celebrated with a dish of the local weaverfish with prawns and mussels.   Hearty and delicious.

With a name that made me smile every time I articulated it I was enjoying this place – a working distillery in the very centre of town – long before I actually got there.  Tours of the distillery are available on weekends, offering the ideal opportunity to learn about Holland’s traditional spirit, jenever (pronounced ye-nay-va).  It’s an ancestor of gin, but I found it more related to blended whisky, especially the premium Korenwijn style.  The accompanying bar is small but hugely popular, and incredibly fascinating.  Its knowledgeable barman schooled me in Dutch drinking habits:  the “buigen voor de borrel” ritual, which involves bending over to drink from an overfilled glass in order to avoid spillage (the Dutch are known to be thrifty), and the “kopstouter”, the traditional manner of drinking jenever, which is beer accompanied by a chaser of the stuff.   The real highlight though is a stupefying range, shelf after shelf, of sensational liqueurs and fruit brandies.  I’m not a huge fan of liqueurs but the flavours of the “half and half”, the “singelburger” and the “hansje in de kelder” blew me away.

I love the concept of craft beer, so when I learnt that Amsterdam had a bar entirely dedicated to the genre I inked it on my itinerary immediately.  The beers were hit and miss, as one might expect from microbrews, but the array of flavours was impressive, living up easily to the promise suggested by their colourful names: Tropical Ralfie, Howling Wolf, and Thai Thai, to name a few.  I was particularly pleased to be served from a growler tap, one of only two in the city, a device which I was encountering for the first time and which apparently controls the level of carbonation (to prevent over-foaming) – and indeed it was a superlative pour.  Hoppa is the perfect place to while away a few hours, enjoying great beer and charcuterie, whilst gazing on the adjacent canal and contemplating this enthralling city.

If a Dutch person were stranded on a desert island and given a choice of two foodstuffs as sustenance, it would undoubtedly be cheese and pastries.  And I wouldn’t argue with it.

If you thought like me that great cheese was in the making then you stand corrected.  The people at Reypenaer don’t even make their own cheese, they’re entirely focused on maturation because they believe that it contributes 80% of the eventual flavour.   Based in Woerden, Holland’s cheese capital, with its conducive microclimate, Reypenaer cheese is matured in a wooden warehouse, allowing it to absorb flavours from the wood over time, much like a fine spirit.  The shop in Amsterdam offers a tasting of six cheeses paired with wine, ranging from a light, tangy four month-old goat cheese, to the rich and potent three year-old gouda XO.  Yum?  An understatement!

You couldn’t throw a croissant in Amsterdam without hitting a bakery or a patisserie, and you’d probably be locked up for callous wastage if you did.  There’s a bit of everything – Amsterdam after all is one of the world’s great cosmopolitan centres – but the local fare, the moreish stroopwaffels and poffertjes, should be foremost in your attentions.   Inexplicably they haven’t travelled; you’re unlikely to get them easily elsewhere, so make hay whilst the sun shines.

Holland is home to the North Sea Jazz Festival, so the country’s a bit of a hub for this style of music.  Café Alto is one of Amsterdam’s foremost live jazz venues,  with a reputation for hosting top quality acts – and, for the most part, somehow, not charging couvert.   No second invitation required.

I was in Amsterdam during the late-January sales, which were so compelling that purchases made sense even in beleaguered Rand terms.   The city centre is replete with a wide variety of shops and stores, including those of reputed Dutch labels such a G-Starr and Whisky and Soda – which is brilliant if you’re inclined to expedition about, but for a quick one-stop shop head to De Bijenkorff, an all-singing, all-dancing department store usefully located at the epicentre on Dam Square.

All that walking around might up your shares on Fitbit, but it also parches the throat and piques the appetite.  Take a break at these enchanting cafes.

This place screams hipster at the top of its voice, which I’ll confess had me in two minds.   My fears though were unfounded.  Whilst the pricing was a touch liberal, and the service a little off-beat, predictably so, the value of the experience could not be faulted.  I was held in rapt by the Ismael Lo soundtrack, by an excellent, original smoothie, and by décor which included a replica of the jaws of a megladon – something you don’t see every day.

I kept walking past this quaint little eatery at inappropriate times but it made such an impression on me, its windows almost bursting with home-style baked goods, that I committed myself to returning.  And I’m glad I did.  The fare is simple – quiches, sandwiches and cakes – but it’s wholesomely delicious.  In case you’re wondering I did polish off my order of a turkey sandwich and a raspberry frangipane tart…to the last crumb.

This marvel is everything that you’d anticipate from the national museum of a country as pioneering, energetic and prolific as Holland.  The art collection (I use the term broadly) is astounding for its own intrinsic value – there are Van Gogh’s and Rembrandt’s aplenty, including the breath-taking, outsized Nightswatch, and much, much more besides – but also because it tells the story of a captivating history.  Not to be missed.

A visit to this memorial is both emotional and, in my opinion, necessary.  There are certain things that should never be forgotten.  The horror and absurdity of Nazism is excruciatingly vivid, and haunting, when seen through the eyes of a child whilst sharing the very same space in which it was experienced.  You’ll want to brace yourself but this excursion is well worthwhile if you want to add some meaning to the fun of your trip. 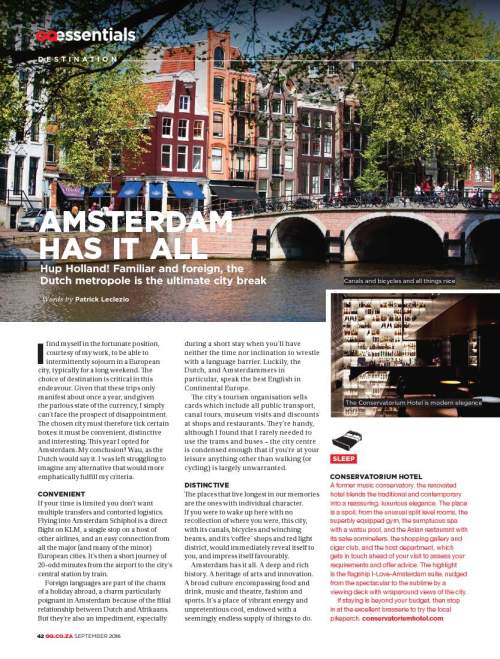 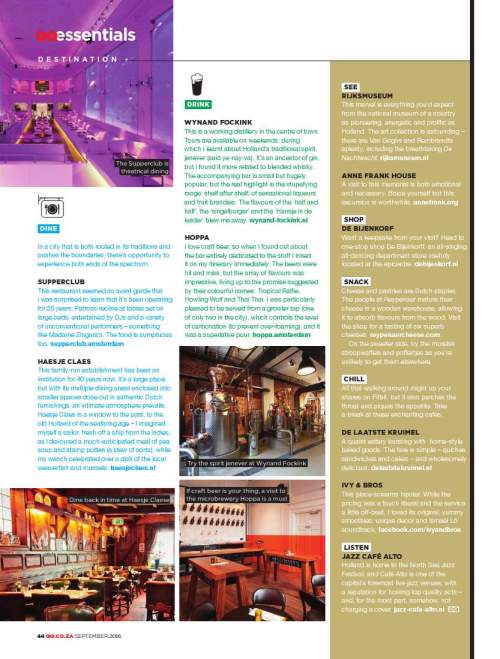