Posted on 7 June 2011 by Patrick Leclezio | Leave a comment

I had an eventful last week dealing with the Bell’s Father’s Day promotion – see The return of WHISKYdotcoza.  We’ve now dispatched the bulk of the orders, so hopefully there’ll be a host of happy customers dramming Bell’s Special Reserve from personalised tumblers in the very near future.

Despite all this activity, I managed to work in a few tastings.  No matter how busy you are you can and should always find time to chill out with a friendly whisky.  It’s good for the soul.

On Saturday I went to my brother’s place for dinner, and, true to form, we ate late.  He and his wife like to partake of some extended kuiering and slowly ease into their evening meals…take a long-limbed, ambling fast bowler’s run-up to the crease if you will.  Their inclinations in this regard gave me ample opportunity to settle in with a few unrushed whiskies.  I opted to start with Bain’s Cape Mountain Whisky, with which I was unacquainted.  In fact – North American whiskeys aside – I’m unfamiliar with single grain whisky as a style, so it was a pleasant surprise to have one at hand to sample.  The brand is named after the mind-numbingly spectacular Bain’s Kloof Pass, built, quite fittingly for the subject of this post, by a Scottish settler. 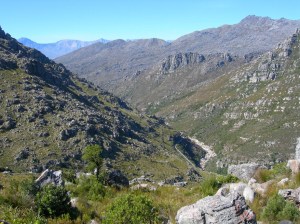 The pass from above

I’ve driven through it on several occasions and it ranks in my opinion as one of the most epic stretches of road in the country.  So the name is a winner, conjuring up the right frame of mind to relax, sip whisky, and unleash one’s imagination.  Onward then.  This is an easy drinking, immediately accessible whisky.  I’d suggest that it would be an ideal introduction to whisky for the novice drinker.  My brother felt that it had more in common with bourbon than scotch, and I wouldn’t disagree.  The verbage on the pack talks about double maturation in first-fill, otherwise unspecified oak casks, but it tastes as if it was aged in virgin wood.  Its overwhelming impression is one of sweetness, a touch cloying but not unpleasant, with notes of vanilla, toffee, and very ripe fruit – apricot and maybe a bit of guava on the palate.   Strikingly, it lavishes you with a great full, thick mouthfeel.  All considered this is a commendable effort by the local industry.  Let’s hope we forge ahead with more challenging, more complex offers in the future.