Posted on 11 January 2018 by Patrick Leclezio | Leave a comment

Making spirits bright and laughing all the way.  Patrick Leclezio prepares for some festive season fun.

Another year is set to bite the dust.  This period always gets me thinking about the elapsing of time, and about how moments in life come and go with a disconcerting haste.  We can get melancholy about it of course, but what’s the point.  This passing is inevitable, it is beyond our control.  What we do with our time however is another matter, and something over which we should exert our most diligent influence, particularly in the weeks ahead, when we all-too-briefly get to shrug off our work obligations and focus on what really matters – our friends, our families, our loved ones, and ourselves.  This is a column about liquor though, so I’ll limit my counsel to the overall sentiment and more specifically to the decorative cherries to which it is dedicated i.e. the inspiring drinks that’ll add a finishing touch to your experiences and festivities this season.  Cheers, sláinte, l’chaim, gesondheid!  Make the most of it.

The gin revolution, whilst much covered in these pages, especially as manifest in the country, and particularly in the Cape, keeps on keeping on, outstripping my ability to stay current; I always seem to be a few newcomers behind.  It’s worth considering, given this effusive flow, how gin is so prevalent over here.  The Cape Floristic Region is one of six worldwide, the only one entirely contained in a single country, and home to an incredible diversity of plant species, numbering some 9000, a large proportion of which (69%) are unique to the region.  It is a botanical paradise, generally, but for an aspirant gin-maker specifically – and it goes some way to explaining the rapid local propagation of new and interesting gins.    If you’re overwhelmed, as you’d unstintingly be forgiven for feeling, and unable to see the wood for the trees, then the Gin Box may be just the thing for you.  This enterprising concept delivers to your doorstep monthly, bi-monthly (each R650), or once-off (R750), a carefully selected small-batch craft gin, accompanied by all sorts of delicious treats and useful gin-related information, including tasting notes and cocktail recipes.

The December / Christmas box is a treasure trove.  The gins, there are three – Gold, Frankincense and Myrrh – each in a 200ml bottle, are bespoke limited editions developed for the Gin Box by the highly regarded Hope on Hopkins distillery.  Each is delightful in its own right, each I’d be happy to drink at any time of year, but its Christmassy flavours of spice, nuts, and soft citrus make it an ideal complement for the festive season.   It’s worth noting that the botanicals actually feature frankincense and myrrh, and that the gold version is lightly aged in oak to give the liquid its eponymous tinge.  The box is stuffed with all sorts of other goodies, including two bottles of Goldberg Japanese Yuzu tonic, distinctly different from the Indian version with its sweeter, citrus overtones; some dried fruit garnishes; and a few food items – notable amongst these being the decadent “Fat Santa Bar” from The Counter (yum!).

Remy Martin’s flagship cognac is the ultimate luxury spirit, possessing a pedigree and an essence unmatched by any other drink.  Its inspirations date back to the Battle of Jarnac in 1569, to the discovery of metal flask on the battlefield that would serve as the model for its renowned, meticulously-crafted, Baccarat decanter.  The Louis “Treize” (French for 13), as it’s referred to, was launched in 1874 and has been continuously produced ever since, inexorably enhancing its reputation as it climbed to the presiding status that it enjoys today.  The liquid itself is a blend with up to 1200 distinct Grande Champagne eaux-de-vie, the youngest matured for a minimum of 40 years, the oldest, incredibly, for over a century.   When I first encountered it I was expecting an oaky character, being at a loss to understand how the cellar masters could restrain the wood on a product with such an extended maturation.  I was wrong.  There’s wood of course, but it’s one of many chimes in this multipart melody.   The “secret” is the tierçon, a special type of cask employed in the maturation.  Made from Limousin oak, with finer staves than typical casks, they are restored but never replaced.  These casks, in my view of it – the Remy people don’t use this term – are largely exhausted, having little of their oak elements left to impart – leaving the maturation to persist via the chemical reactions in the liquid and the interaction of the liquid with its environment as they breathe.   The result is tantalising and transfixing, a rare phenomenon of awe-inspiring depth and complexity – all the benefits of old age but without its drawbacks.  The Louis XIII earns its chops and then some.

Our sunny alfresco South African Christmases demand a sunny alfresco cocktail, the kind that you mix up in a jug and serve under blue skies on a lawn.   Enter the ho-ho-ho merry Cointreau Fizz.   I’d never considered triple sec as anything other than a sidekick ingredient, Tonto to the Tequila Lone Ranger in my margarita, before chancing upon the Fizz – which promptly prompted me to revaluate my impressions.  It’s simple, delicious and healthy, the sweet spirit offsetting tangy lime for a perfect balance.

Fill a jug with ice, add Cointreau and lime, top off with sparkling water, and garnish with an orange wheel or any sweet juicy fruit. 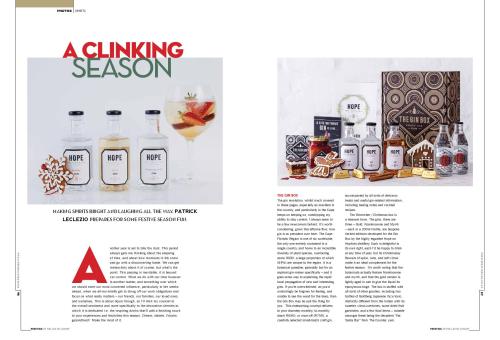 Posted on 8 November 2013 by Patrick Leclezio | Leave a comment

Can liqueurs be taken seriously?  Patrick Leclezio steps out of his comfort zone.

I can’t say that I’m a huge fan of liqueurs. They’re very sweet, they’re sometimes creamy – attributes which I can appreciate in a dessert but which seem frivolous in a drink – and they’re also usually undercooked; our legislation, likely a reflection of global standards, only stipulates a minimum 24% ABV for liqueurs and an even limper 15% for cream liqueurs. I still shudder from the residual effects of the many cloying, unavoidable ‘springboks’ that those of us growing up here would inevitably have drunk.  Hard tack is meant to be…well…hard, at least in my view of things. On reflection – and it can be rewarding to reflect on preconceptions – I have to concede though that mine is a rather narrow view, which deserves some reconsideration.  Many liqueurs have a deep and rich tradition, rivalling and sometimes exceeding some of the other classic spirits.  Others yet have remodelled the perception of spirits – and made them accessible to an otherwise resistant audience.  These attributes and this effort command enough credit to warrant a little exploration so I set out on a search and found four liqueurs which gave me pause for thought (albeit when limited to small doses).

The little booklet hanging around this unusual, globular bottle (styled on the globus cruciger – a medieval Christian symbol) reads as follows: “According to legend Chambord was inspired by a luxurious raspberry liqueur produced for King Louis XIV during his visit to Chateau Chambord in the 17th Century”.  This is typical of liquor brands – the creation of a heritage, or appearance thereof, or association thereto.  Dubious, but no matter; the product itself stands quite securely on its own two feet. It seems to have taken the niche previously occupied by the poorly-branded, undifferentiated crème de cassis market and claimed it as its own.  Note that crème de cassis is a blackcurrant flavoured grape brandy (or sometimes neutral spirit) whereas Chambord is a cognac base infused with black raspberries, blackcurrant, and vanilla – similar enough to share a broad flavour profile but different and premium enough to be set apart.  Sipped neat (and chilled), partnered with a brut sparkling wine in an approximation of a Kir Royale, or indeed, if my small sampling is reliable indication, splashed into any one of their recommended cocktails (also to be found in the little booklet), it is simply a magnificent drink.

Magnum, like all other cream liqueurs, owes a debt of gratitude to Bailey’s Irish Cream liqueur – which in 1974 introduced people to the idea of a mix of liquor and cream (with the implied, utterly invented suggestion that such concoctions were part of Irish rural traditions). Today Bailey’s sells six and half million nine litre cases per annum, so clearly this is a format which has since enjoyed significant traction.  Magnum may be an imitator, the latest in a fairly long line, but it’s a damn good one.  It’s also local – developed and bottled right here in Cape Town.  From its exceptional milk-churn fashioned container, and its Scotch-malt-whisky content (distinct from Bailey’s, which is blended Irish whiskey), to its delicious, luxuriant flavour, it ticks all the boxes.  This drink might even tempt me to revisit the springbok…(I said might).

There’s an ice-cream parlour in Franschhoek that sells a delicious orange-chocolate ice-cream; I never miss the opportunity to pop in and savour a few scoops when I’m in the area.  My favourite pastry also happens to be the cannolo, a fried dough tube filled with an orange-zest ricotta cream.  I could go on but I’m sure the point is made – clearly I’m partial to citrus flavours.  So it’ll be no surprise that Cointreau, the king of Triple-Sec, is on my list (I could just as well have selected Grand Marnier – also orangey, also superb, great on crêpes – but its local distribution is a bit patchy, so why build up anticipation that may end in disappointment).  Cointreau is one of those liqueurs to which I had earlier alluded – boasting a long and proud (and genuine) history constituting some 150 palate-pleasing years.  It is notable for having produced one of the (if not the) first motion-picture liquor advertisements, featuring an iconic Pierrot character, and for its inclusion in one of the world’s most popular cocktail, the Margarita (any triple-sec might do, but life’s too short to settle for anything less than the best), but mostly it’s just notable for being downright delicious.

Ok, I’ll admit, you’re not going to catch me drinking much of this stuff, if any at all.  I find its nutty sweetness overpowering in the mouth.  But I do like its aroma, and, whilst smell might not be as satisfying as taste, it is in a sense a lot more interesting: there are 32 primary aromas and only five primary tastes.  One whiff and I can imagine that I’ve dunked my head in a bag of hazelnuts.  In typical fashion the brand harks back to ye olden times with its talk of legends and monks and past centuries, and with its Friar-Tuck-habit (or rather the Italian Franciscan counterpart) bottle – rope belt included.  Would it be cynical to suggest that the drink was probably synthesised in a Piedmontese laboratory not too long ago?  Snide remarks aside, it’s worth keeping a bottle in the liquor cabinet, if for nothing else other than dousing a bowl of ice-cream.