Posted on 27 February 2017 by Patrick Leclezio | Leave a comment

What to try before the summer fades.   Patrick Leclezio explores six of the best.

Everyone’s making gin these days.  The world has rediscovered a taste for it, and in an era of educated consumption, this burgeoning appetite has provoked a plethora of options, ranging from the old and established (and their more recent offshoots), to a raft of new entrants that are both industrial and craft in scale.  Unlike brown spirits gin doesn’t need to be matured (although some are), so the barriers to entry are relatively low, and accordingly they are being vaulted in droves.  This is an exciting unfolding of events – there’s never been more variety than there is at present.   Ten years ago a local aficionado would have been scratching around amongst a handful of products, today you can board a ride on a virtually endless gin adventure.   But being swamped by an embarrassment of riches brings its own problems – what to choose?  It’s a first world problem I grant you, but let me nonetheless help out with some first class solutions.

If any gin can claim a legendary aura, then Plymouth is it.  Bottled at 57% ABV, the so-called “navy strength”, because that’s the proofing level at which alcohol ignites gunpowder, this is a big gin in every sense.  It has longstanding ties to the British Navy, and it even has its own geographical indication – Plymouth Gin is (somewhat bizarrely) both a brand, and a protected regional name (like Champagne).  The bold nose leads out a complex, tight spectrum of flavours onto a settled palate: juniper and pepper, hemmed in by a barky, earthy woodiness, and strong herbal cologne.   It may be a touch less dry than your typical London Dry Gin, but this is unequivocally masculine stuff nonetheless, projecting a tethered depth of power and an incredible balance.  There are no wild lurches or veering detours here – nothing is out of place, and nothing is arbitrary.  You get the sense that this is liquid that has been evolved to a state of military precision over many years, with any kinks that it may have had progressively chiselled away.  It’s expensive, but keep in mind that it goes a lot further than its lower-bottling-strength compatriots.  The label says “for almost 200 years the navy never left port without it”.  I’m hardly going to be setting off any cannons, but it’s a sentiment that I can take to heart, for the sheer drinking pleasure of it.

Simone Musgrave’s eponymous gin now has a stablemate that despite not being an incendiary is setting the local craft scene alight.  It’s not a pink gin in the conventional sense, but it’s pink in colour and in intention.   This new variant adds rosehip to the signature botanicals and is further infused with rose water, resulting in a flavour that’s dominated by rich floral notes, with the spiciness and the muskiness of the original still evident, but receded into the background.  The common theme amongst new wave gins (in South Africa specifically but elsewhere too) is the demotion of juniper, with this one being a case in point.   This may not be traditional, and it may even flout regulations (the EU set for gin dictating that the predominant flavour must be juniper), but I for one like it (and I’m pretty sure I’m not the only one).  It represents an intrepid expansion in gin territory, giving us new and more varied landscapes to explore and vistas to enjoy.  The Musgrave Pink iteration is probably a gin that’ll appeal more to women than men, but regardless of your sex, it’s striking and distinctive, and it’s stirring things up, so it should be on your radar.

Wilderer has a reputation for creating delightful small-batch liquid, grappas, eau de vie’s and the like.  It’s a name that’s become synonymous with craftsmanship in the little liquor niche that it occupies.   The chaps have most recently turned their hands to gin, their first foray into a big, popular category of spirits, with predictably impressive results.  A menthol nose and a peppery palate poke out above a dense herbaceous canopy, with tendrils of liquorice injecting a fleeting sweetness.   This gin is a flavour window into an olde worlde apothecary, or so I imagine it: vaguely medicinal, herby aromas dancing one with the other, leading, following, then rotating, throwing off your perspective.  There’s a lot going on here – it’s entrancingly interesting, and demanding of your attention.   You’ll spend a lot of time with this gin without getting bored.

The Verdant and Amber have long been two of my favourite gins.  In these drinks the Inverroche crew at Stilbaai has forged some sort of an alignment of the stars, I kid you not.  The former evokes dried flowers, the latter a balance between boiled sweets (a lollipop nose) and bitter-ish tannins.  But this crude attempt at describing their superbly cohesive flavours leaves much to be desired; the finely wrought combinations of fynbos ingredients, both distilled and infused, defy facile interpretations.  Gin is a versatile drink, but let’s be honest – any pretender lives and dies on its rendition of a GnT, and to a lesser extent a martini.  Some gins fight with the tonic, others are overwhelmed.   These two, I want to say serendipitously but that would be disrespectful, are the perfect complements, enhancing the tonic whilst maintaining the integrity of their characters.  I happened to try them in martini recently for the first time – less dry, and atypical, but mouth wateringly delicious.  No one-trick-pony these.   It’s very simple: if you’re South African and you claim to like gin, then you’re doing yourself a gross disservice if you haven’t drunk from the Inverroche well.

Despite all of the recent activity the benchmark in gin remains the London Dry style:  large in juniper, dry – as the name suggests, and often tangy, with well-integrated, fully distilled botanicals, and in Bombay it has a beautifully representative ambassador.   This is the ideal everyday gin – premium of quality but affordable, complex in flavour but not challenging, tiring or polarising, and soft, versatile, and accessible but also full flavoured and interesting.   The sight of that electric blue bottle behind my bar gives me a certain sense of inner peace – I’d feel off-kilter without it.  Bombay Sapphire is a gem indeed. 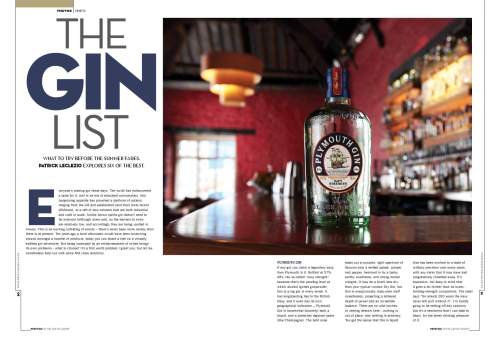