Posted on 18 February 2020 by Patrick Leclezio | Leave a comment

If you were to bring up the Martini in arbitrary conversation you’d likely get a response that alludes to James Bond.  He’s almost come to own the drink and the drink him, such is the strength of their association.  And it’s not difficult to understand why Ian Fleming imbued his famous superspy with this predilection.  They fit like hand in glove.  They’re both suave and sophisticated, they’re both single-mindedly serious (with a certain dry wit), and they both get the job done, always.  The Martini has played no small part in fashioning the 007 legend, and he in turn has transported the drink into today’s popular imagination.

We thank him for it, for keeping the flame alive.  At one time of course – for long stretches on either side of the Second World War beginning with the roaring twenties – the Martini was wildly popular of its own accord, the symbol of an unrestrained golden age of excess.  It has ebbed since, but now, resurgent, is flowing again – perhaps though having evolved into a vehicle for discerning rather than uninhibited drinking.

In this new phase of its existence there seems to be real attention to quality.  As an example you’ll be hard-pressed to find any credible establishment that recommends a shaken Martini, despite the influential force of Bond’s iconic prescription. Shaking risks overdilution, and introduces foamy agitation on what should be a static presentation.  Some also say that it ‘bruises’ the gin, but what that means isn’t obviously discernible.  That it’s still a drop-two-gears-surge of a drink is without question – this is a stiff injection of booze – but the balance has shifted somewhat to a greater appreciation of its other charms: it’s also cultivated, elegant, and, if made properly, outright delicious.

On how this should be accomplished you’ll find Martini aficionados often pitted against one another in passionate disagreements, but whilst differences abound, there is widespread consensus on two vital elements: that the botanical-loaded favours of gin make a more interesting (and varying) base than vodka’s bland neutrality (Movie Bond prefers vodka, but Book Bond drinks both), and that it should be drunk deep-chilled i.e. stirred with lots of ice, and dispensed in frozen glassware. The rest is down to personal preference, notably the ratio of vermouth to gin, which ranges from rinsing the ice in vermouth before discarding it, to the recent 50:50 trend.  Noël Coward famously suggested that “a perfect martini should be made by filling a glass with gin, then waving it in the general direction of Italy”, but given that the best dry vermouths come from France rather than Italy this ill-informed opinion should be treated with some scepticism – gin without vermouth is just gin, not a Martini. The addition of bitters can be considered and dry sherry substituted for vermouth, although purists would sneer at both suggestions. Garnishes are essential and play a defining role; an expressed twist of lemon produces a completely different result to olives, and both to olive brine.  In fact, such is their effect that the employment of another garnish, a cocktail onion, confers a distinct name to the drink: the Gibson. There’s much to be said for taking an open-minded position and evaluating all these options, in-field.

The Martini has persisted through the decades, with Bond’s help, for good reason: it is intrinsically exceptional, allowing it to weather fluctuations and impress itself on one generation after another.  And once you’ve acquired a taste for it, you’ll be hooked for life.  Ice breaker, conversation flamer, party blaster – it ticks all the boxes.  Go forth and stir.

Stir well with ice and strain into chilled glasses

Garnish each with three queen olives on a spear 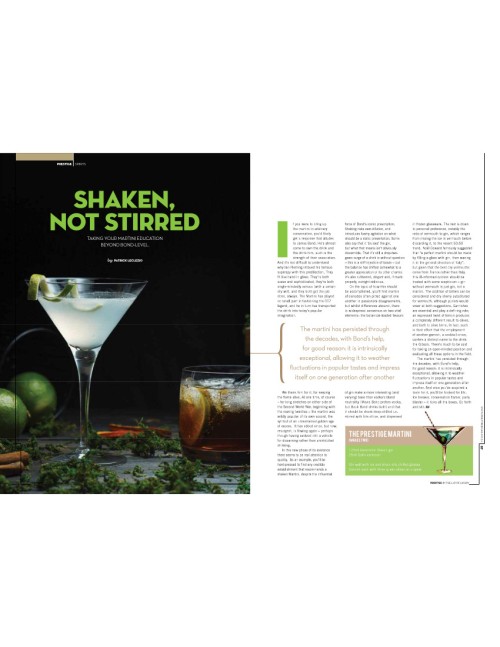 As it appeared – with apologies for the incorrectly copy-edited title and the image.

The king of white spirits

Posted on 30 July 2014 by Patrick Leclezio | Leave a comment

It’s gin of course, but who will win its crown? Patrick Leclezio casts an eye over the claimants. 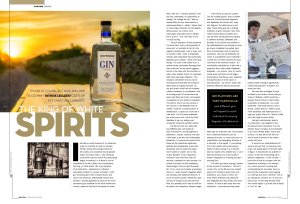 I ascribe no small measure of my attraction to gin to its ability to hold my interest. Whisky stands tall amongst spirits for the variety and complexity encompassed within its broach reach – and whilst gin could never hope to match this scale, being largely unmatured, in a sense it can be considered to be the whisky, and consequently the king, of white spirits. Gin is gin because of its botanicals – ingredients or infusions, potentially limitless in number (virtually), which give individual gins their complex flavour, and which very distinctly differentiate one gin from another. I recently gathered up some of the more prominent gins available on the local market and invited a panel of hard tack luminaries to review them with me – a serious analysis, sure, but also, admittedly, an opportunity to indulge. And indulge we did. I take no responsibility for any inaccuracies or misrepresentations – rather I blame them on some large measures of unstoppable deliciousness. As a friend once memorably responded when I offered him a g & t: “ooh, talk dirty to me”. It’s that exciting.

The gin repertoire is fairly extensive: it’s drunk neat, with a citrus garnish of some sort, in cocktails (in fact it’s the original cocktail base), with a mixer, and in martinis (I feel I need to separately mention and emphasise this particularly legendary gin cocktail). Most commonly though, it’s drunk with Indian tonic: a quinine-laced carbonated beverage that was conceived, as the name suggests, and as is the case with the evolution of many other popular drinks, for purposes other than epicurean titillation. This mosquito neutraliser struck a chord, and became entrenched for its flavour rather than its original function. So any gin review would not be complete without evaluation in combination with its running mate. Of course there are tonics and there are tonics. Schweppes is passable, but why settle for passable – life’s too short. The best to which we have access in this country is the delightful Fitch & Leedes, made by a small producer in Stellenbosch. I guess you could call it craft tonic. It’s a bit more expensive but worth every cent. Needless to say our tasting was conducted using this excellent option.

Gin flavours are very particular – and different gins will appeal to each individual to varying degrees of preference. Juniper, certainly, and also citrus seem to be the most widespread botanicals. I’d venture the opinion that these are the traditional signatures, perhaps best represented in gins like Tanqueray, and the under-the-radar, more muted (or subtle), but no less worthy Boodles. In fact Tanqueray marries so well with tonic that it’s become a standard for that purpose; it’s smooth and easy, but still interesting. Supercharge it and you get Tanqueray No. 10, or, once you’re better acquainted, Tanq 10 – same smooth integrated effect but bursting with additional flavours. If you’re inclined towards “traditional” gins and you’re willing to pay the premium then you probably don’t have to look too far beyond its impressive, faceted visage.

If the Tanqs occupy the London Dry Gin middle ground, then on either side you’ll will find Bombay Sapphire and Beefeater, the former soft, open, and fragrant, the latter savoury and edgy. These three gins are a striking exhibition of gin’s diversity. They have clearly distinct flavour profiles and I can see each having particular appeal to different drinkers: Beefeater and Bombay in my opinion are unlikely to be substitutable for one another to most gin lovers. Beefeater has pulled back from its extremities with its premium expression, the new-ish Beefeater 24, which is considerably more moderate; I wonder how it’s been received by hard-core fans of the mainline variant. It’s wonderfully enjoyable but it feels like a departure from what makes Beefeater Beefeater – in my opinion.

Now it’s worth noting some extrinsics at this stage. I firmly believe that flavour, and, relatedly, the appreciation of a fine spirit, is psychosomatic – by which I mean that external influences beyond aroma and taste play an important role. This extends from contextual elements such as setting and mood, to visual cues such as presentation and packaging. Bombay is a standout in this regard – a compelling mix of the classic and contemporary: Queen Victoria mixing it up in electric blue (or maybe a few shades shy). I can’t help but be drawn to it and luckily it doesn’t disappoint – anything but! – on cracking the seal.

The other gin that’s making a splash at the moment is Hendrick’s. This isn’t London Dry, so the flavours are created partly from infusions rather than only distillates, as a result of which the drink seems relatively less balanced and integrated but also bolder and more visceral. It’s also a step away from the traditional – cucumber and rose petal predominate making it significantly unlike anything else I’ve tasted; it’s rich, round and racy.

We were also privileged to have included in our review a local craft gin, made in Stillbaai, called Inverroche – epically South African in that fynbos constitutes its botanicals. It’s a well-presented, well-made product, with a strong, unique flavour. I prefer my gin more restrained and traditional, but I’d urge you to give this a try. There’s a little bit of the Cape in every bottle.

Last, and unfortunately least, in our estimation was Seagram’s Gin, the eponymously named gin of a now defunct liquor company accommodated in an iconic frosted bottle. Spirity and obvious, it’s best left to the formula which made it famous in the States – mixed with juice.

It would be an understatement if I were to tell you that I’ve become a fan of gin. My appreciation of this fine spirit is legion. It has become my aperitif of choice. At the risk of sounding like a tedious Capetonian – a risk I’ll take – I can think of little to compare with the experience of sitting on my veranda on a warm summer’s evening, and contemplating the mountain (and my day and life in general) whilst sipping on a stiff gin and tonic. Glorious! This is my special gin moment, as I’m sure you have yours. As the bible sort-of advises (and who would argue) – go forth and multiply it. Chin chin!

Special thanks to Marsh Middleton and Bernard Gutman.