The land of the rising dram

Posted on 28 February 2017 by Patrick Leclezio | Leave a comment

Whisky, big in Japan.  Japan, big in whisky.  Patrick Leclezio separates his mizuwaris from his oyuwaris.

Whisky geeks have been on it for a while, but now it’s starting to explode in the mainstream.  Japanese, if you can get it, is the hottest thing in whisky.  And it’s been due for some time. Bill Murray memorably introduced (most of) us to it in 2003’s Lost in Translation: “For good times, make it Suntory time”.  After all when some paranormal publicity is required who you gonna call? Since then Suntory and Nikka, both the company and brand names of the two leading players, and their flagship single malts, Yamazaki and Yoichi, have rapidly established themselves in our collective consciousness, with the smaller marques following in their wakes.  Demand has grown to fever pitch, but with South Africa low on the list of supply priorities, the stuff is thin on the ground.  I wanted to know more and try more before writing this piece, so I sought out the country’s leading Japanese whisky distributor (and expert) Hector McBeth, to tap into his voluminous knowledge of the subject…and to sneak a few drams from his private stock.

Stranger in a strange land.  Five words that sum up the origins of Japanese whisky.  A Japanese man living and studying in distant Scotland in the early twentieth century.  A curious Scottish tradition taking root in Japan shortly thereafter.  These are the two intertwined threads, epitomising the unifying magic of whisky, that precipitated this industry.   Its watershed moment though came much later, in 2008, when Yoichi’s 20YO and the Suntory Hibiki were awarded the titles of world’s best single malt and world’s best blended whisky respectively by Whisky Magazine, one of the most credible of whisky authorities.  A deluge of awards have followed.

The face behind the liquid and its success, is somewhat inscrutable.  In fact Japanese whisky is a study in contrasts.  On the one hand there’s extreme rigidity.  The model and the basic techniques, and hence the flavours, are derived from Scotch.  I had always held out that the one tangibly identifiable feature distinguishing its whisky from others was the use of Japanese oak (mizunara), inserting the incense notes that are identifiable in some of its expressions.  Hector disavowed me of the notion, confirming that the proportion of these casks in any vatting or blend is minimal.  It’s a nice story, and it’s sometimes apparent (in Yamazaki in particular), but on the whole it’s not significant.  There just isn’t enough of the stuff (the wood).  Adding to its limitations, the various distilleries, already few in number, by and large do not trade stocks outside of their parent companies (of which there are fewer still), hence restricting the variety of product that’s available for vatting and blending.  This is a traditional convention, profoundly fixed in the Japanese ethic of company loyalty.  The result is a set of institutions that can appear deeply conservative, unimaginative and cut-off-your-nose-to-spite-your-face inhibiting.

Then there’s the other hand, the contrast.  Paradoxically the same issues that have constrained Japanese whisky seem also to have driven it forward.  Starved of variety, Japanese distilleries began producing it for themselves.  A Scotch distillery will typically only produce one type of new make.  In Japan individual distilleries began experimenting with different barleys, different malting methods, different yeasts, different stills, and different distillation methods, to produce a wide variety of different single malts.  Bamboo charcoal filtration has been introduced.  High quality single malt has been made in a Coffey still. Necessity as they say is the mother of invention.  The narrow parameters of their setup – the adoption of the Scotch paradigm, the cultural issues – seem to have stimulated rather than restrained innovation – producing spectacular results.

The real impacts remain implicit rather than explicit.  It’s difficult to point out visible, significant distinguishing features.  Whereas other territories have made their mark with radical departures, the Japanese have made small tweaks, focusing on execution of the details.  Their work with yeast is supposedly industry leading, to the point, Hector tells me, that they legally register their strains.  My take-out is that they have taken vatting and blending to greater levels of dedication than anyone else.   Ireland and North America have their own very distinct styles.  Scotch is bound to provenance.   Japan is all about using their human resources to make the most of their limited physical resources – in whisky as in everything else really.  This is particularly evident in blended malts.   A neglected sector elsewhere the Japanese have embraced it, recognising and exploiting the extra dimension that it offers.  I’ve often maintained that blended malts have all the intrinsic advantages of single malts, and then some: they go beyond by providing the blender with an extensive palette of varying liquid, resulting in vatted potential that is undeniably superior (at least theoretically).   The Nikka portfolio in SA is a case in point: Nikka Pure Malts Red and Black, and the Taketsuru Pure Malt, along with Nikka from the Barrel, a high malt blend, being the most prevalent.

The industry has gone about things its own way, assiduously keeping the faith.  What it lacks in macro it has doubled in micro creativity, as growing legions of fans can bear witness.   If you’d like to be in that number, then march over to either Kyoto Gardens or Bascule Bar in Cape Town, or WhiskyBrother in Joburg, South Africa’s most assured purveyors of Japanese whisky.  May the dram be with you.

Mizuwari: whisky with water and ice, served in a tall glass and stirred 13 and half times.

Oyuwaris: whisky with hot water, a custom that was borrowed from the drinking of sochu (the indigenous Japanese spirit). 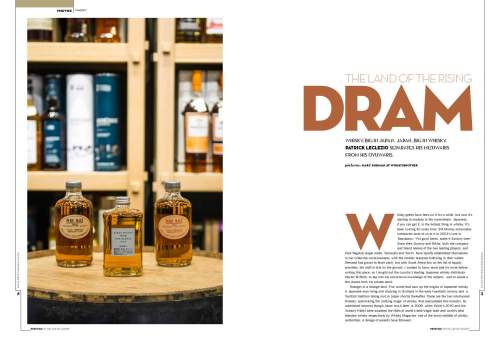 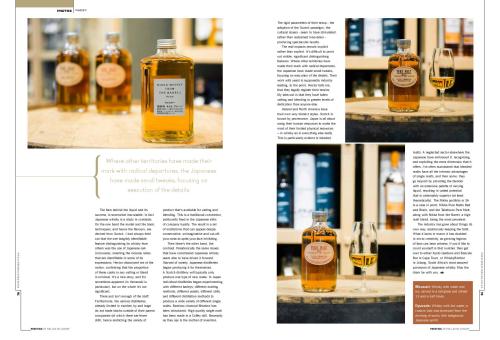