Clash of the Titans

Posted on 21 August 2017 by Patrick Leclezio | Leave a comment

The battle for number one.   Patrick Leclezio checks out the biggest and most intense rivalry in the single malt universe.

There’s probably no greater engine for progress than competition.  It has defined our existence.  What is survival, if not a competition?  What is evolution, the mechanism culminating in an ability to build distilleries and make whisky (we can stop now!), if not the act of competing?  Competition elicits some of the finest human qualities – invention, excellence, determination – but also some of the worst, luckily largely controlled in our civilised world.  Healthy competition, by all objective measures, renders us, as a community, enhanced, advanced, and improved, across a range of endeavours, both the more and the less consequential.  Amongst the former, definitely amongst the former, somewhere between curing cancer and developing clean energy, is the crafting of single malt whisky.   And in recent times the thrusting and parrying between Glenfiddich and Glenlivet (The Glenlivet, if you want to be proper about it) has lit up this universe.

Following an extended era of persistent domination by Glenfiddich, the margins have been tighter in recent times, with the honours changing hands on two occasions in the last three years.  It’s not surprising that the onset of this competitive fervour corresponds with a period of tremendous activity and dynamism for the single malt style; its share of Scotch whisky sales have been on a radical incline.  Despite these gains though it remains a comparatively small and niched style; for all that I’m styling them “titans” the Glens, whilst significant in volume, having each crested the million case mark, are not mass-market brands.   Single malts appeal to a discerning audience, and whilst it may not be unswayed by extrinsic influence, it is relatively more attuned to the liquid itself.  In my opinion this makes the competitiveness in the sector a lot more meaningful.  If attributes like product innovation and quality rather than those like advertising and distribution, have a greater hold on the keys to success, then this can only be of benefit to genuine whisky lovers.   When Glenfiddich regained the mantle in 2016 brand spokesperson Enda O’Sullivan commented: “We are delighted with the current performance of Glenfiddich, and rather than focus on the best-selling single malt, we are committed to leading the category through innovation and creativity”.  It gives me a warm and fuzzy feeling to know that this is a space where the two can be one and the same.

This competition in fact can’t really be understood in a brand context.  Glenfiddich versus Glenlivet?  Those are just words.  The actual, visceral fight is taking place out there on various fronts, between the whiskies:  liquid against liquid.  I recently ventured out onto these battlefields, amidst the popping of corks, the clinking of glasses and the venturing of “slainte mhaths”, to visit with a few of those that are making a difference.   It became immediately evident, if indeed it hadn’t been already, that the story of their mettle, of the iron within their fists, like the Roman legions of old, begins with their superb foot soldiers.

The 12YO’s in each stable are what you expect them to be and more: of broad appeal, and consequently of moderate flavour, exceptionally reliable, and universally enjoyable.  If any of this sounds underwhelming then bear with me as I elaborate.  I drink a lot of different whisky, much of it old, much of it uniquely flavoursome.  I guess you could say that I’m whisky spoiled.  Nevertheless, I’ll drink a Glenlivet 12YO, or a Glenfiddich 12YO, anytime, anyplace, following any other whisky, and I know, beyond a shadow of a doubt, that I’ll savour every moment of it.  After work drinks, after dinner drinks, high society drinks, watching the rugby drinks, gala evening drinks, you name it, they’re up to it.  The nutty pineapple sponge flavour of the one, and the soft, melt-in-your-mouth fruitiness of the other guarantee satisfaction to almost any palate.  When I said exceptionally reliable, I meant just that.

The rest of their core ranges is faultless, there isn’t a middling whisky to be found.  Amongst the Glenfiddichs, the 14YO Rich Oak and the 15YO Solera Reserve deserve high praise.  The Rich Oak’s depth of flavour is a treat in such a young and affordable whisky, a testament to the casks employed, whilst the solera vat’s legendary status is well deserved, delivering a breadth and balance that’s virtually unparalleled in this whisky’s class.  On a rand for rand basis it makes a claim that is difficult to challenge, such is the value it delivers.   When I consider the Glenlivet stalwarts it’s the 18YO that immediately jumps out.  Here a prominent sherry influence pervades, powerful raisin flavours overlaying citrus fruits, apricots, and fudge, assembling into a whisky that’s quite simply marvellous; one of those that I’ve chosen to mark portentous moments in my life.

Faultless is one thing.  But you can’t expect to prevail only by not making mistakes.  The SAS has it right.  Who dares wins!  Both of the Glens have dared, both have reinvented battle strategy – with products that are bold and different.  Glenlivet’s  Nadurra range went back to its roots, its Guardians Chapters inserted consumers into the blending process, a result of which was the show-stopping Exotic, and its Alpha introduced a new style of cask to whisky.  Glenfiddich’s recent Experimental Series may well be partly responsible for the latest tilting of the scales, both the IPA Experiment and the Project XX are explicitly distinct and interesting.  I was mulling over the XX during the last few weeks, trying to put my finger on what made it and its stablemate (a bottle of which I polished off in short order last year) so standout and so quaffable: it’s the casks’ profile obviously, these having been handpicked by the brand’s ambassadors given free rein to the maturation warehouse, but also the vatting.  My guess is there are young whiskies significantly included, but unlike many other NAS products, these two have matched execution to the best intentions motivating this format.  The younger liquid adds, in this case an appealing husky robustness, but it doesn’t detract.

I have no doubt that we can expect more new and exciting products from both brands in the years to come.   The battle lines have been etched, but unlike the real thing, this is a war in which everyone wins – not least us whisky fans.  The competition between the two is bringing out their best, as they spur each other to new heights.   The only problem will be choosing which to splash into your glass as you kick up your feet tonight.  Make it one (or two) of each – and may the dram be with you. 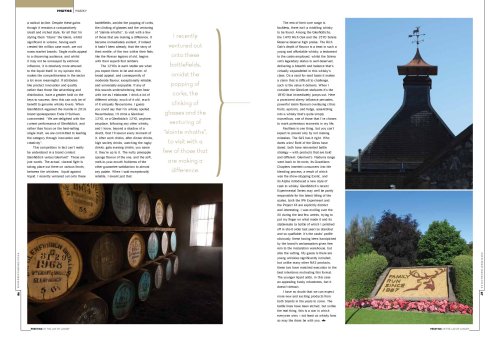