Posted on 21 February 2011 by Patrick Leclezio | Leave a comment

Where are you…? Search as I might, by the end of the evening I still hadn’t found what I was looking for. I’m referring of course, in case you haven’t deciphered my subtle-as-a-sledgehammer turns of phrase, to the U2 concert held on Friday at the Greenpoint Stadium, where there wasn’t a drop of whisky to be begged, borrowed or stolen. The dram was most definitely not with us.  Strange I thought because Heineken, one of the sponsors, resides in the Brandhouse stable, home also to the largest whisky portfolio in the country, including the County Antrim-based Bushmills. What could have been more fitting under a…uh…moonlit sky than watching these Irish gods of rock music whilst sipping Black Bush, the tipple reputedly favoured by Bono? But it was not to be. Make no mistake the people at Brandhouse are sharp operators, and not likely to resist the prospect of having their whiskies available to an 80 000 strong captive audience. So then, what manner of perniciousness was it that conspired to deny us? I decided to call Brandhouse to get some answers. They put me onto Big Concerts COO John Langford who explained that it was very difficult to get a special events liquor licence covering spirits, so they generally don’t bother applying (unless it’s specific to restricted areas like a VIP room). Bad news for us whisky-loving concert goers. It seems that the authorities just don’t trust us with hard tack in large groups. I guess situations like these are why the flask was invented. 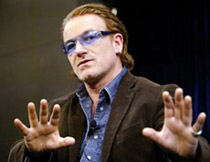 Hey, I'm not happy about it either but no need to go all Woodward and Bernstein on us

This whisky fiasco notwithstanding the concert was top-drawer, although for many people the live experience must have been diminished somewhat by viewing most of the proceedings on their cell-phone screens; one of my mates with whom I attended the concert recorded so much footage that I’m expecting him to release a bootleg DVD.