Posted on 23 February 2011 by Patrick Leclezio | Leave a comment

This evening I’m off to attend the local launch of the Berry Bros & Rudd (BBR) spirits portfolio, which includes the Glenrothes single malt.  The name is pronounced Glen-roth-this (this as in thistle, not as in this gaelic pronunciation is a bugger).   I’m excited, not only because it’s an opportunity to savour a great whisky, but also because of the historical interest value.

BBR is Britain’s oldest wine and spirits merchant, having been established in 1698, and it has since cemented a world-leading position as a supplier of fine wines and super-premium spirits.  Its most famous creation was Cutty Sark, the blended whisky named after the Scots-made tea clipper, at one time the world’s fastest ship.  Cutty Sark claims to be the first light-coloured blended whisky ever made, having originally (not sure if it’s still the case today) shunned the use of spirit caramel, which many whisky makers use to darken their products and ensure colour consistency, but which is also thought to mask more subtle flavours.  It was formulated by Charles Julian, who went on to create J&B in its image, as well as having a hand in putting together the Chivas Regal that we drink today.  From its origins in the early 1920’s Cutty Sark went on to become a prohibition-era success story and eventually the best-selling Scotch whisky in the US (at one time).  The brand, I guess because of its stature in American society, has featured repeatedly in popular culture.  Its epic name and distinctive bottle and label really made it stand out; I remember seeing it in movies such as Caddyshack and Goodfellas, marvelling at how much Chevy, Bob and others seemed to like the stuff, and wondering why I’d never come across it locally. 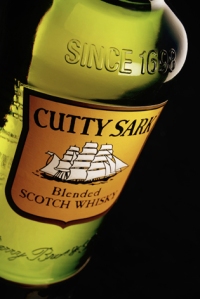 Glenrothes is the signature malt in Cutty Sark, and a significant contributor to other blends such as Famous Grouse and Chivas Regal.  BBR no longer owns Cutty Sark – in a contorted-sounding deal it recently sold the brand to the Edrington Group (owners of the Macallan, Famous Grouse, and Highland Park), in return acquiring the rights to the Glenrothes brand.  The Glenrothes distillery remains in Edrington’s hands, ostensibly to ensure control of supply for Cutty Sark et al.  The good news coming out of all of this for whisky lovers is that there should now be an increased focus on Glenrothes as a single malt, compared to past years where it served primarily as an ingredient for blends.  I’ll report back tomorrow on what we can expect from Glenrothes in SA.

Incidentally one of Cutty Sark’s first “distributors” was the smuggler Captain Bill McCoy, who had a reputation for supplying uncut, unadulterated spirits at a time (prohibition) when this was more exception than rule…hence the expression “the real McCoy”. 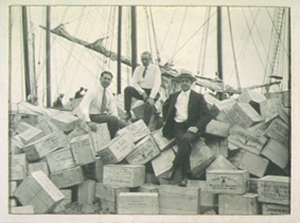