Posted on 3 March 2011 by Patrick Leclezio | Leave a comment

No, it’s not for St. Patrick’s Day, it’s not even Irish…it’s Bruichladdich (pronounced Brook-laddie).  On Tuesday the Bruichladdich distillery, which is located on the island of Islay, a mecca for peat-freaks the world over, and which produces the only organic Islay whisky (apparently a favourite of British PM David Cameron), became the first distillery to generate electricity using waste derived from the making of whisky.

This requires an explanation that can’t gloss too lightly over the technical details, but please bear with me because it’s a compelling story.

Whisky production creates 2 major waste streams: draff, and pot ale.  Draff, the barley husks that remain after the worts* is drained from the mash tun**, is commonly used as cattle feed.  Pretty much everyone ticks that box.  Pot ale, the watery post-distillation waste, has on the other hand up to now simply been discarded across the board.  On Islay the major distilleries along with the adjoining Jura distillery have clubbed together on a pipeline (located at Caol Ila) through which they pump their pot ale under the Sound of Islay.  Pot ale however contains organic material which can be converted to biogas (i.e. energy) by a process called anaerobic digestion (AD).  This has been theoretically known some time, but actual attempts to do it weren’t economically efficient enough to be employed sustainably…until recently.  Where others have tried and failed Bruichladdich, along with technology partners Biowayste, have got it right, and on a sufficient scale to power the distillery and its 10 acre site, including the bottling hall, computers, offices, warehouses, and vehicles.  Estimated carbon savings amount to a gratifying 225 tons per year.

The Biogas tanks at Bruichladdich

I was suitably impressed, not only because I find genuine environmental successes hugely uplifting, but also because these guys are independent and privately-owned, small players in an industry that is dominated by large multinationals wielding virtually limitless resources.  So how did it come to be that they were the ones to score this landmark victory?

I got in touch with Mark Reynier, CEO of Bruichladdich, to get some further insight into the situation.  He explained, unsurprisingly, that one of the big boys (I’ll keep the name to myself) had initiated a similar program some years ago as part of a large-scale development on the mainland, but that it had been plagued with problems, including the explosion of an AD vat and other less dramatic failures.  They had since, to quote Mark, been “all over us like a rash trying to find out how we have done this” whilst simultaneously putting “every obstacle in the way to try and slow us down”. These obstacles included using dubious measures to deny Bruichladdich access to the pipeline (of which they are part-owners!) for disposal of the post-AD waste – which is both cleaner than pot ale, and which had already been signed-off by the Scottish Environmental Protection Agency (the body controlling discharge permits).  Flashback to 1994, as Michael Schumacher crashes into Damon Hill to stop him from winning the race and taking the championship.  Luckily in this version of events Damon wins.

Keep in mind that I’ve only heard one side of this saga…but as they say, history is written by the winners, so we’ll go with it.  Internal industry wrangling aside, this is a fantastically positive initiative.  Well done Bruichladdich!  They deserve a bit of a punt, so in Mark’s words: “Drink Bruichladdich and save the planet!” 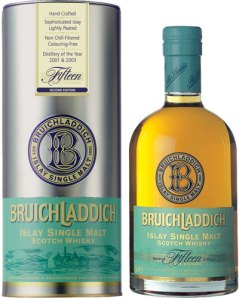