Posted on 28 February 2011 by Patrick Leclezio | Leave a comment

It’s a glorious monday morning in the Mother City (if you don’t mind chasing hats), the Mountain watches protectively over me as I write this post, and all is well in this part of the world.  Somewhat responsible for my buoyant mood is my discovery, or rather re-discovery, of a bottle of Chivas Brothers 30yo whisky that I had sort-of forgotten I had.  I’m not a collector; whilst I can certainly admire and appreciate a lovingly assembled stash of whisky, I personally prefer to drink rather than hoard.  So open it I will, and soon.  More about it then.

Over the weekend I was glued to my sofa whilst watching the World Cup games taking place in India, and since I’m always thinking about whisky my thoughts quite naturally turned to Indian whisky.  Whisky in India is big business: of the 5 best-selling whisky brands in the world in 2009, 4 were Indian, including Bagpiper, the world’s top seller for that year.  You’d be forgiven for thinking that this is a healthy situation – a developing market asserting itself in the arena, increased global competition, a wake-up call for the big boys – but the picture is less than rosy.   In actual fact the Indian whisky industry has a whiff about it which compares unfavourably to a French cheese ripening in the Mumbai heat.

At the heart of the matter is the question of whether Indian whisky is really whisky at all.  Vijay Mallya, the owner of United Spirits, India’s largest whisky producer, was quoted as saying:  “I’ve had this constant battle with the SWA (Scotch Whisky Association) on the definition of whisky. They won’t let me export my Indian whisky out of India and into the European Union. My last offer to them was that I said I was quite happy to label it ‘Indian whisky’ the same way that Suntory makes Japanese whisky. Why should there be any sort of discrimination? But for reasons best known to them, which is why we have our little disagreements every so often, they just won’t allow it”.   I just love this guy.  I have the feeling that he’s going to be fertilizing my blog for years to come.  Indian whisky can in fact be imported into the EU (and duty-free at that) but it cannot be labelled as “whisky”, Indian or otherwise.  Whisky by historical tradition, by overwhelming convention, and by law in most countries, must be made from cereals (grains).  In India the bulk of local whisky is made from molasses, which is subsequently blended with various proportions of malt whisky, depending on the particular brand and its level of quality and premium-ness.  “You will get the alcohol but none of the flavours,” said Bill Lumsden, an industry pioneer and the master distiller at Glenmorangie, of the molasses spirit in Indian whisky.  Mallya’s reasoning is beyond farcical.  Japanese whisky – as I’m sure he well knows – is in fact made from malt and other grains, and is undisputedly acknowledged to be whisky. 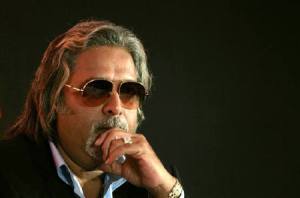 I'm also the owner of the Flat Earth Society

The reality is that Indian whisky is protected in its local market by exorbitant tariffs which violate WTO rules and without which the industry would collapse.  This is costing the Indian government and people a fortune in lost revenue, promoting counterfeiting, damaging trade, and, worst of all, deceiving Indian palates.  It reminds me of an experience I had in China recently when I bought some American whiskey.  Close comparison of the bottle with the real thing – which only happened after buying and tasting – revealed that it was a 99.5% perfect replica.  So in much the same way most Chinese people believe that Jack Daniels tastes like toner fluid, so most Indian people believe that whisky tastes like a Black Label with a few shots of Mainstay.

Some progress is being made: I read that this month Scotch whisky gained GI (Geographical Indication) status in India, but I personally wonder about how this will be enforced.   When there are vast sums of money at stake (India is far and away the world’s largest whisky market), and powerful interests with entrenched agendas in the equation, things are rarely simple.   Of the two biggest Indian whisky brands, the first, the aforementioned Bagpiper, features a corresponding visual on the label, and the second is called McDowell’s…and these are just two examples – Scottish sounding names and Scottish imagery abound, which in any other market would be a clear violation of GI regulations.

It’ll be interesting to see how things develop, but in my opinion the future lies with brands such as Amrut, a highly acclaimed, genuine, Indian born-and-bred malt whisky.  I reckon that only if India cultivates quality brands that can stand up to international competition will barriers be lowered and the situation resolved.  Even if I’m wrong at least I’ve figured out why Cane Spirits sell so well in Natal.