Posted on 7 November 2013 by Patrick Leclezio | Leave a comment

Want to brush up on your whisky knowledge?  Why not take the Masterclass.  PATRICK LECLEZIO signs up for some tutelage. 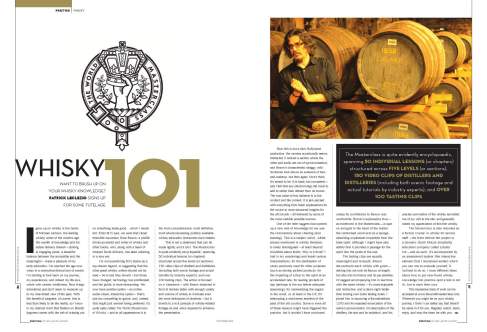 I grew up in whisky on the books of Michael Jackson, the leading whisky writer of the modern age.  His wealth of knowledge and his astute delivery thereof – striking, in engaging prose, a beautiful balance between the accessible and the meaningful – made a pleasure of my early education.  I’ve reached the age now when in a somewhat dismal turn of events I’m starting to look back on my journey, my experiences, and indeed my life as a whole with certain wistfulness.  New things sometimes just don’t seem to measure up to my rose-tinted view of the past. With the benefit of progress of course this is less than likely to be the reality, so I know in my rational mind that fixation on blissful bygones comes with the risk of missing out on something really good…which I nearly did. Enter MJ’s (yes, we were that close) erstwhile successor, Dave Broom, a prolific drinks journalist and writer of whisky and other books in his own right, who along with a team of intrepid South Africans has been ushering in a new era.

I’m not questioning MJ’s status as a top-drawer legend, or suggesting that the other great whisky writers should not be read – he is and they should; but times have changed, technology has proliferated, and the public is more demanding.  We now have another option – an online, audio-visual, interactive option – that’s just too compelling to ignore, and, indeed, that might just warrant being preferred: it’s quite aptly called The World Masterclass of Whisky – and to all appearances it is the most comprehensive, most definitive, most all-encompassing publicly available whisky education instrument ever created.

This is not a statement that can be made lightly, and it isn’t.  The Masterclass is quite evidently encyclopaedic, spanning 50 individual lessons (or chapters) structured across five levels (or sections), 150 video clips of distillers and distilleries (including both scenic footage and actual tutorials by industry experts), and over 100 tasting clips.  The action is focused on a “classroom”- with Broom stationed in front of shelves laden with enough variety and volume of whisky to motivate even the most delinquent of students – but it diverts to a rich panoply of whisky-related footage as and when required to enhance the presentation.

Now this is not a slick Hollywood production: the camera occasionally seems distracted, I noticed a section where the video and audio are out of synchronisation, and Broom’s characteristic shaggy, wild-Scotsman look shows no evidence of hair-and-makeup; but then again I don’t think it’s meant to be. It is basic but competent – and I felt that any shortcomings did more to add to rather than detract from its charm.  The true value of this initiative is in the content and the context: it is jam-packed with everything from basic explanations for the novice to more advanced insights for the aficionado – all delivered by some of the most credible possible sources at the most credible possible sources.

One of the little nuggets that opened up a new vein of knowledge for me was the commentary about charring (and toasting).  This is a subject which whilst always mentioned in whisky literature is rarely interrogated – at least beyond trivialities about levels.  Why is it done? I had in my wanderings heard various interpretations: for the sterilisation of casks previously used for other purposes (such as storing pickled produce); for the imparting of colour to the spirit at an accelerated rate; for sealing pockets of sap (perhaps in the era before adequate seasoning); for caramelising the sugars in the wood; or, at least in the US, for attempting a smokiness redolent of the peat of the old country. Some or even all of these reasons might have triggered the practice but it wouldn’t have continued unless its contribution to flavour was worthwhile.  Broom’s explanation thus – as evidenced in the Masterclass – is spot on and gets to the heart of the matter: the carbonised wood acts as a sponge adsorbing unpleasant impurities from the base spirit, although I might have also added that it provides a passage for the spirit into the pores of the oak.

The tasting clips are equally meaningful and in-depth.  Broom deconstructs each whisky with gusto – delving into not only its flavour, at length, but also into its history and its peculiarities.  I’d suggest accompanying him in real time with the same whisky – it’s most enjoyable and instructive, and a damn sight better than looking over some tasting notes.  I joined him in savouring a Bunnahabhain 12YO and his repeated enunciation of the name’s pronunciation, his description of the distillery (its size its isolation), and his precise summation of the whisky reminded me of my visit to the site, and generally raised my appreciation of this fine whisky.

The Masterclass is also intended as a formal “course” in whisky for service staff – the force behind the project is a dynamic South African hospitality education company called Lobster Ink – and as such it’s accompanied by an assessment system (the interactive element that I mentioned earlier) which you can use to evaluate yourself, if inclined to do so.  I have different ideas about how to put new found whisky knowledge into practice (and a test is not it), but to each their own.

This impressive body of work can be accessed at www.theworldmasterclass.com.  Wherever you might be on your whisky journey I think I can safely say that there’ll be value in it for you.  Register, watch, learn, enjoy, and may the dram be with you.