I mentioned in an earlier post about pairings that I had recently attended two lunches themed on this format.  The second of these – hosted at the fabulous Pot Luck Club by the SA Brandy Foundation and KWV – was a showcase for the latter’s core range of premium brandies.   I don’t think that they could have chosen a better venue.  The spectacular setting – the restaurant is perched at the “top” of Woodstock and enjoys wraparound views – was outdone only by the exquisite meal (and brandies of course), the highlight of which was a world-beating main course of pork belly with cured apple.  I’ve heard that this fare has become voguish – fully understandable if the general standard is within shouting distance of the Pot Luck Club’s tour de force.

The guys with whom I typically hobnob at most of the liquor events I attend were absent, this being brandy rather than whisky related, so I had the opportunity to make some new acquaintances, including Savile Row and Emily Post aficionado Neil Pendock, whom certain readers may remember fondly – I know I do – from this post, and the affable Alastair Coombe from the blog Brandy and Ginger.

The focus during the lunch seemed to be on the new 12YO, which is admittedly very good (a satisfyingly rich brandy, like its 15YO stable-mate), but my attention was drawn to the less fashionable 10YO – for various reasons: it’s a great, flavoursome brandy (I particularly enjoyed the tart apricot on the palate); it’s been selling at a ridiculously good price (good for us, not sure if it’s so good for KWV or for the standing of premium brandies – we’ll just have to trust that they know what they’re doing); and, most compellingly, it’s signalling a promising shift in the industry.

I’ve written in the past about how I believe that South African brandy is being hampered by the presence of unmatured wine spirits in its compositions.  Well done then to KWV for taking their 10YO and transforming it from vintage to potstill (100% pot distilled, matured brandy).  This is the direction in which the industry should be travelling.   The descriptor “vintage” however still remains on the bottles (and on the tasting notes provided to us at the lunch!) –  I’m told that “they have yet to effect a label change” – which I find puzzling (disquieting?); these types of changes don’t happen overnight and I would have thought KWV would want to shout this out.  Anyhow, stranger things have happened.  The selection – delicious throughout – was completed by the 20YO potstill, which I found to have a deep, layered nose that retreated to softer, more restrained flavours on the palate.

This KWV ensemble is an engaging, interesting range of potstills that demonstrates the excellence of South African brandy.  One day in the not too distant future we’ll be scratching our heads and marvelling at how it could ever have been possible in late 2013 – early 2014 to buy a 10YO and 12YO potstill brandy of such quality for under R200 and R250 respectively (despite having to bear in mind that at 38% ABV versus 43% for most other spirits they should be, simplistically, about 12% cheaper like-for-like).  Brandy might have been struggling of late but if producers can invest in the intrinsics and keep offering this calibre of liquid then the tide will surely turn.

I’ve previously remarked on the good work being done by the SA Brandy Foundation, the co-hosts and organisers of the lunch – which was another feather in their cap.  I may not agree with their emphasis on brandy cocktails (the basis for one of their promotional campaigns), but there’s no arguing with the vigour and dynamism that they’ve injected into the category.  I’d left the event impressed – as I’m sure was the intention, job deservedly done – and replete with positive sentiments, so it’s with some reluctance and discomfort (a mental indigestion – ironic because the lunch sank happily into my depths) that I’m now going to raise a few concerns; unfortunately it’s necessary if I’m to be objective and true to my observations.

I don’t pretend to be comprehensively aware of all of (or even most of) the Foundation’s activities.  I’m sure that there’s a lot of great (and vital) work being done about which I don’t have the slightest inkling – so keep this context in mind. I’ve kept an eye however on its efforts in the area of consumer education, which I had felt to be commendable.  It was sad thus to take note of a few (small, but important in my opinion) recent reversals.

Firstly I noticed this call-out on page eight of the Summer 2013 edition of the Foundation’s magazine (called Angel’s Share). 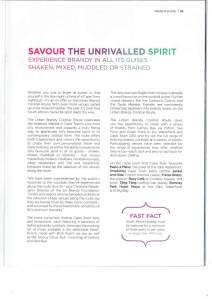 Now, this is clearly false.  When I queried it, rather than retracting or admitting a mistake, I was told by the Foundation’s spokesperson that “Potstill brandy must be aged for a minimum of three years in casks no larger than 340 litres”.  Somehow the fact that they hadn’t mentioned the word “potstill” didn’t seem to enter the equation. Misleading? Definitely.  Deliberately misleading?  I sincerely hope not.  I think the latter, if it were the case – apart from being just plain wrong – would also be short-sighted and counter-productive in the long-run:  if I was told that a 1.6L car was a 2.5L I’d probably end up being disappointed with its performance.

Secondly I also noticed that the Foundation’s explanations of the classes of South African brandy, as stated on its website and in the magazine, had gone from being brilliantly specific (and to my mind very clear and easy-to-understand) a few months ago to vague-ish, lacking transparency, and, in one case – the definition for vintage brandy – a bit confusing.  With regards to the latter the magazine suggests that these “contain a minimum of 30% potstilled brandy, blended with matured and unmatured wine spirit” whilst the current version of website defines them as “potstill brandy blended with matured wine spirit” (I’ve since been told that the latter is accurate, following an agreement by the industry, but not yet enacted in law – so much like the improvement to potstill brandy that did away with its unmatured component). Now there’s obviously detail in these definitions that could be perceived as unflattering, however the Foundation’s purported reason for how it now portrays them, i.e. the stripping out of much of this detail (you can see this taking place even in the two excerpts I’ve just provided), was simplicity – to deal with “a crisis regarding consumer confusion and apathy”.  I disagree.  Surely the best way to tackle confusion and apathy is better not lesser education.  This is easier said than done of course – I realise that I’m shouting from the stands – but if South African brandy has aspirations to be world-class, which I think it rightfully does, then I don’t think there’s any other way.

These issues though don’t really matter when you’re sitting with a glass of the good stuff in front of you.  My message then to brandy lovers for the new year:  ditch your coke and take the step up to potstill, at least partially.  On the evidence of this showing, and others, you won’t look back.